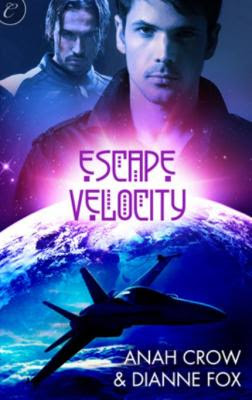 Length: 61,000 words
Blurb
Linguist Elios Campbell is thrilled to be granted flight time in a Colonial Guard fighter jet, until he catches sight of his pilot. Spending time with Sender Kinnison holds even more appeal than the flight itself.

Sender's desire for other men is forbidden by his faith and his family. He tries to resist his attraction to Elios, who is unlike anyone he's ever known. When he fails, the incredible sex quickly leads to something deeper, forcing Sender to question his long-held beliefs.

Then, duty calls Sender home to the repressed colony of Themis. Will he be forced to give up a future with Elios to honor the ghosts of his past?

Overall
I went into Escape Velocity with extremely high hopes, previously having enjoyed Crow and Fox's One Real Thing. However, my initial read left me disappointed and flummoxed on how the writing could feel so weak compared to ORT. By the end, I was enjoying the story more and was left overall satisfied (althought still disappointed). I wrote a review reflecting that, put it aside and read some other books, then came back to Escape Velocity.

While it didn't transform into an amazing novel between reads, many of my initial feelings did change slightly, and I'll try to present both in my review. I enjoyed the novel more on my second reading, which could partially be due to my general mood, but the weaknesses and strengths still stood by the end.

Strengths
On my first read, I had difficulty relating with either of the main characters, and the focus on sex and their jobs in the beginning left me lukewarm about Sender on the first part of the second read as well. However, Elios felt more approachable in the second read and was easier to empathize with as an injured party trying not to get his heart broken again. Most of my difficulties with Sender centered around his hang ups with religion, not with his interactions with his friends, Elios, or on the job. I liked Sender, but I couldn't relate to his religious plight. Overall I liked the characters and I liked the heart-wrenching path the tale took (I especially liked the heart-wrenching path the book took).

The sci-fi elements of this story--including all the world building--were well handled, providing just enough detail to flesh out what was going on without bogging down the story. The clashing cultures, the colonized world, the contrast between Themis and Luna, and the beautiful descriptions all add to a vivid image of where the characters are. Also, I appreciate the dichotomy of Themis being described as grungy, old, and weighed down with politics, culture and population while Luna is clean, sunny, and open. Themis is visualized as a bureaucratic hell and Luna is its heavenly counterpart.

Despite my desire to see more of the Pandora project developed (see below), I enjoyed the direction this story--the romantic part--took. The conflict, the pained emotions, and the strength of the characters all lent themselves to a whirlwind story with a satisfying ending.

Weaknesses
My initial thought was that the writing wasn't bad, but it fell flat for me. It felt stiff and a little awkward, which made it difficult to really sink into the characters. Because of that, the sex scenes didn't really melt me and until about 50% of the way, I wasn't really into what was happening. My second read let me analyze the language closer, and I found the majority of the story had fairly good writing, but some phrases and structures were awkward and stiff. This was balanced out by other phrases' brilliance and originality. I wouldn't mark this as a great read, but it's not something to suffer through either.

While I enjoy--in fact search out--books with religious themes, I was not convinced by Sender's continued following of his family's religious beliefs. Obviously he was raised with it, but the story never conveyed a sense that he really believed it, despite casual mentions that he thought what he was doing was wrong. So when he has to choose between the religious followings and his own happiness, I couldn't comprehend why he'd even hesitate. In my second read I came to terms with this a little more, as I could see that he made decisions not based on his beliefs but on his obligations, yet I still couldn't buy his beliefs/struggles.

(Spoiler Below)
*
*
*
*
*
Despite the mysterious ship with the mysterious language and the importance of the military and pilots, the whole ordeal took second place to Sender's conflict. While I can respect the idea that this is all just one step in life for them (and the mission), the beginning of the book led me to believe that the mystery was going to be solved further than it was. I liked that it didn't distract from the romance, but it also took me off guard a little as well. I'm conflicted on how I feel about it. I almost feel (especially with the first edition's original title) that this was meant to be a series that never advanced.

Requested this book for review.
Posted by Unknown at 10:28