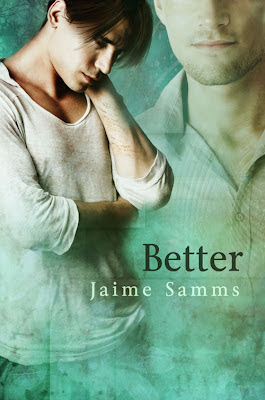 Length: 240 pages
Blurb
After filing charges that put his abusive ex-Dom behind bars, Jesse Turbul relocates halfway across the country, hoping to escape his past—but, of course, it's never that easy. When Jesse meets third-year law student Aadon at the library where he works, their mutual attraction is instant and obvious.

Despite the sparks, they just can't seem to make it work. Aadon is mired in guilt over his inability to help his older brother, damaged by events far too similar to Jesse’s past. Jesse is stuck in his own desperate wish to forget the painful shadow that continues to threaten him and any hope of a happy future.

The only way to move forward is for Jesse to acknowledge he’s broken and for Aadon to accept he can’t make him better.

Overall
This is an excellent exploration of the "broken" and the "fixers" and how they work together and how they clash. Admittedly, I love a broken character, and this story played that point well. In addition, the main characters have Dom/Sub relations, although the complexities of Jesse's past make any real "play" fall somewhere between difficult and impossible (at least within the scope of this book). Still, the idea is explored.

This novel is character driven, with a plot that focuses on the characters' emotional advancements. The most action happens in car trips and emotional blow-ups, but the story doesn't require more than this, as it keeps true to what the blurb offers. I would definitely recommend this novel to readers who like character/emotional studies, broken characters, and emotional suffering and who don't require a heavy plot.

Strengths
One of the things I appreciated most about this story was that nothing was easy for the characters. They didn't 'get' each other right off the bat. They had arguments, disagreements, and differing expectations. While outside sources didn't cause too much conflict, they did precipitate events by adding outside pressure. There was a realistic struggle that progressed the story and forced the main characters to deal with the issues and baggage each carried. There is never a magical outside source that fixes things, but instead the character is enabled to overcome what he needs to overcome.

Better is an emotionally compelling piece that digs into the heart. In some ways the topics the book broaches are difficult to read and highly sensitive matters, but they are well handled and didn't feel triggering. I was pulled along on the emotional journey with both characters and enjoyed it to the very end.

A good mix of characters with most, if not all, doing their best to 'help' their friends--whether that help is wanted or not! Although elements of this world and the people in it are seen with rose-tinted lenses, reality is still respected, in sequences of events and in characters. This definitely has a "feel good" ending that rounds out a rather heavy story with hope.

Weaknesses
While not necessarily a weakness, the narration is told in a third-person expanded voice, which means we jump from person to person. It was properly handled and mainly stuck to the main characters (if not completely, I can't recall now), but some readers may have difficulty adjusting to this type of storytelling, since it's not as common a perspective.

There isn't much plot outside of emotional development, which, again, isn't a weakness, but readers should expect this going into the story. I was pleasantly surprised by how much I enjoyed this character exploration of a topic that--honestly--gets used a lot in the books I read. Or maybe I just hunt those books out. Either way, I felt it was done well and made up for the lack of any action-based plot.

The only real weakness was toward the end where Jesse evolved a little too quickly in order to slip in a sexy sex scene. I can't grade too hard against it because everyone is different, but I felt rather startled at the advancement from "Don't touch me," to "I'm ready for this!" ...Though who wouldn't want Aadon to hold him down and make love to him? Really.

Requested this book for review.
Posted by Unknown at 21:18