Saddle up for some Happy Endings

(rent/buy) Like most Brooks movies, this won’t be for all, but it does hit a pretty wide audience base. I’d seen parts of this one before, but only recently saw all of it in one sitting. Definitely worth the watch although Men in Tights is still my favorite. This is funny and offensive, and despite an unorthodox ending, it has a very satisfying story and conclusion. The sheriff and his gunslinger are a great duo and the two actors play well off one another. I’d recommend pretty much everyone seeing this, although I’d definitely say rent it first.

Happy Endings, Season Two - Dave and Alex have managed to stay friends, even though Alex jilted Dave at the altar, and they continue to reshuffle their feelings while Brad and Jane plan their second wedding, and singletons Penny and Max search for a Mr. Right to call their own.

(rent) I say rent only because it’s season two :) I’m not sure it was as strong as season one, but it definitely has its own strengths and story. There is slightly more plot in some of the characters and a fair amount of character development. That being said, this is comedy, so nothing too deep usually happens and the episodes keep with their fun, goofy story telling. I love that all the characters have their time to shine and their time to fail, and no one is always the idiot. Worth picking up if you saw season one, and I’d recommend Happy Endings to most open-minded viewers.

Trembling Before G-d - Two hot-button issues -- homosexuality and religion -- are thrust together in this revealing documentary by Sandi Simcha Dubowski. Gay and lesbian Jews who have been cast off by their families and by religious figures are interviewed in major metropolitan areas across the globe. Even in societies where homosexuality is gaining acceptance, many of those interviewed still struggle with balancing an intolerant faith with their sexual orientation.

(rent) I’m not Jewish (or religious at all) so this was incredibly educational about Jewish cultures and customs, although it seems to stick mostly to orthodox. I found the documentary to be well done and well handled. It was educational, and while the documenters obviously have opinions, I felt things were fairly balanced in portrayal. Religious persons may not agree with me, but I still think this is worth a watch (although some parts are better than others). Overall has a pretty positive feel about it, even if some of the content is disheartening.

Community, Season One - After his bachelor's degree is revoked, lawyer Jeff Winger returns to community college, where he forms a study group with a few oddballs, including the seven-times-married Pierce and perfectionist Annie.

(rent) This is an enjoyable comedy, but it definitely won’t be for everyone. It has a jaded/cruel humor much of the time, but never crosses the line of being too mean (I felt). It feels equally offensive to everyone, which is what lets it get away with the jibes. The entire premise is silly, which lets every ridiculous event that happens in the show be reasonable. This is pointless but enjoyable, and great for background noise if you want to multitask.

This Ugly Yet Beautiful World - (anime) Takeru is a typical high school student until he saves Hikari, an alien girl with no memory of her past. Committing himself to take care of her, Takeru's life is suddenly filled with aliens and monsters.

(meh) This 12-episode series has a very simple plot, minimal character development, and few interesting events. The aliens and monsters (the exciting bits) seem to take a backseat to a high-school-drama-esqe story. While this isn’t a bad show, it’s just completely lackluster and is forgotten five minutes after watching. People who want a story about a bunch of high schoolers and their new alien friend who has to learn all the interesting things about earth will probably enjoy it, but all others I’d warn away.
Posted by Unknown at 16:05 No comments:

To Feel the Sun by Marie Sexton 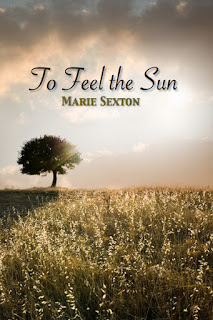 To Feel the Sun by Marie Sexton
Stars: 5/5

Overall
This short is worth the pain it puts you through. Beautiful and heart wrenching.

Review
This story is beautiful and painful. The reader knows, nearly from the beginning, that things aren't going to be happy go lucky. And yet there is still a positive feel to the end of the story. It has lovely prose, is well written, and while just a slice of life, it is the most poignant slice of life you can find.

I definitely recommend this to everyone, unless you absolutely hate pieces with sad undertones/overtones.
Posted by Unknown at 14:22 No comments:

Adam's Gift: A Memoir of a Pastor’s Calling to Defy the Church’s Persecution of Lesbians and Gays by Jimmy Creech 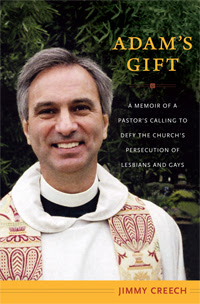 Adam's Gift: A Memoir of a Pastor’s Calling to Defy the Church’s Persecution of Lesbians and Gays by Jimmy Creech
Stars: 3.5-4/5

Length: 376 pages
Blurb
Jimmy Creech, a United Methodist pastor in North Carolina, was visited one morning in 1984 by Adam, a longtime parishioner whom he liked and respected. Adam said that he was gay, and that he was leaving The United Methodist Church, which had just pronounced that “self-avowed practicing homosexuals” could not be ordained. He would not be part of a community that excluded him. Creech found himself instinctively supporting Adam, telling him that he was sure that God loved and accepted him as he was. Adam’s Gift is Creech’s inspiring first-person account of how that conversation transformed his life and ministry.Adam’s visit prompted Creech to re-evaluate his belief that homosexuality was a sin, and to research the scriptural basis for the church’s position. He determined that the church was mistaken, that scriptural translations and interpretations had been botched and dangerously distorted. As a Christian, Creech came to believe that discriminating against lesbian, gay, bisexual, and transgender people was morally wrong. This understanding compelled him to perform same-gender commitment ceremonies, which conflicted with church directives. Creech was tried twice by The United Methodist Church, and, after the second trial, his ordination credentials were revoked. Adam’s Gift is a moving story and an important chapter in the unfinished struggle for lesbian, gay, bisexual, and transgender civil and human rights.

Overall
An inspiring and educational telling of one religious man's journey.

Review
What I read of this was a while ago, so many of the details are fuzzy. I didn't stop because I wasn't enjoying it, but rather because I became somewhat bored with it. Part of this could be my unfamiliarity with autobiographies. He faced many struggles and he overcame as many as he could. I think if I had continued, I would have enjoyed it, but I couldn't entice myself to return to it either. It was fairly well written and interesting, at least the 60% that I read.

There are many parts of this story that would make it ideal for a religious person who was trying to understand homosexuality to read. Obviously the narrator is relatable and the reader gets to witness his progression from standard blinded individual to understanding to advocate.

In some ways this is a painful story to read because the author had to face many difficulties just because he was welcoming to homosexuals. I think it's an interesting comparison to the struggles he relates of the gay people he's known, although (as far as I read and recall) he doesn't make this connection in text. He's doing what he feels is right and while he doesn't like some of the results, he refuses to back down.

I'd definitely recommend picking this up in a library if you can find it, but this will be a must-have for only some readers.
Posted by Unknown at 15:59 No comments: Length: 71,400 words (259 pages)
Blurb
The course of true love doesn’t always run clean. But sometimes getting dirty is half the fun.

Entomology grad student Adam Ellery meets Denver Rogers, a muscle-bound hunk of sexy, when Denver effortlessly dispatches the drunken frat boys harassing Adam at the Tucker Springs laundromat. Thanking him turns into flirting, and then, much to Adam’s delight, hot sex over the laundry table.

Though Denver’s job as a bouncer at a gay bar means he gets his pick of geek-sexy college twinks, he can’t get Adam out of his head. Adam seems to need the same rough play Denver does, and it’s damn hard to say no to such a perfect fit.

Trouble is, Adam isn’t just shy: he has obsessive compulsive disorder and clinical anxiety, conditions which have ruined past relationships. And while Denver might be able to bench-press a pile of grad students, he comes from a history of abuse and is terrified of getting his GED. Neither Denver nor Adam want to face their dirty laundry, but to stay together, they’re going to have to come clean.

This title is part of the Tucker Springs universe.

Overall
Sexy kink with tons of psychology and mental health issues, and all well handled. Maybe it’s the concussion talking, but this was a winner!

Note: I normally don’t review Riptide books because of conflict of interest (and I usually read them for work-related duties). I had nothing to do with this one (since I was concussed and out of work), and I’m not rating it (because it’s unfair). However, this was the first new book I read after my concussion, still during my recovery period, and I’m otherwise lacking reviews.

Review
Since the car accident and concussion, I was scared of returning to reading and reviewing, afraid I couldn’t give an honest, unbiased review after my brain hurty. This was the first new book I picked up after the accident and it eased me into reading new content and reviewing.

I really had no idea what to expect from this story, aside from my previous experience with Denver (in Second Hand) and the blurb that told me kink and laundry were happening. I was too out of it (due to said concussion) to really go in with any expectations, which I think worked in my favor. It was a wonderful surprise.

The story being told isn’t incredibly complex, but it is a gigantic character study. Which as you know totally gets me hot and bothered when reading ;) Adam has his issues, Denver has his, and they both have friends who are incredibly understanding, mainly because they have worked through (or are working through) their own issues. Seeing the progression of these two men and their friends is just heartbreaking and heartwarming.

Be forewarned, that while this is a well-paced novel, the front half has more sexy sex than the latter half, which was the only slightly jarring part about it. But the reasons for this are good and necessary, so it’s not bad, but some readers may want to know ahead of time. Otherwise, I definitely recommend picking this one up for a read, especially for those who like kink and psychology.
Posted by Unknown at 08:47 No comments:

You may have noticed still no reviews.  Well, I have one that I've written and I have a film review list that may be ready to go up after that, but otherwise nothing.

I can read, which is a good thing, yes? But I've also been really judgemental about books I've been reading (like, books I previously enjoyed!). So I've hesitated jumping into a new book for fear I will judge it wrongly. But hopefully this week I'll feel like reading one of the dozen delicious books I have waiting for me.

And then updates will resume like normal. Hopefully this week there will be two updates, and then we'll go from there, but I'm making no promises.
Posted by Unknown at 19:36 No comments:

Labels: update
Newer Posts Older Posts Home
Subscribe to: Posts (Atom)
"When I get a little money I buy books; and if any is left I buy food and clothes"
- Erasmus