Turkey in the Snow by Amy Lane 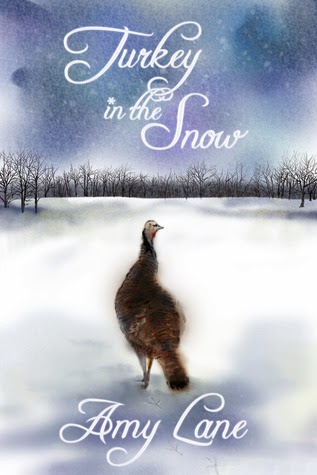 Turkey in the Snow by Amy Lane
Stars: 5/5

Length: 102 pages
Blurb
Since Hank Calder’s four-year-old niece, Josie, came to live with him, his life has been plenty dramatic, thank you, and the last thing he needs is a swishy, flaming twinkie to complicate things. But when Justin, the daycare worker at his gym, offers to do something incredibly nice for Hank—and for Josie—Hank is forced to reconsider. Justin may be flamboyant in his speech and gestures, but his heart and kindness are as rock steady and dependable as anyone, even Hank, could ask for. Can Hank trust in his dramatic “turkey in the snow” to offer his heart the joy he and Josie have never known?

Overall
A sweet Christmas tale that looks at family, stereotypes, and prejudice, all without going too dark, but still gripping the heart and not letting go until the end.

Review
After a long day of Christmas with half the family, I curled up with this story, just planning on reading a bit before bed. Yes, I realize this is the trap we all fall into. I stayed up much later than I was planning, and then scarfed down the rest with breakfast.

The plot wasn’t edge-of-your-seat or overly dramatic (except a few parts, which needed to be). It was just so warm I wanted to keep reading. Hank and Justin are complete opposites, except for the fact that they both want to give the best to Josie, who is adorable, just enough annoyance to feel true and just enough sweet to make even this grinch smirk.

While there isn’t a lot of relationship building given to Hank and Justin, and it feels a little like they go from 0 to 60, I didn’t mind. Both men had good reasons and enough history between them that once they started to help each other, it came together.

Speaking of helping each other...I loved that Justin, who works, goes to school, lives at home, and is the younger of the two, is actually the one riding up on the white horse in this story. It takes the standard and turns it on its head, which is nice and is part of what made me love Justin so much.

I found Hank’s two friends, especially Alan, to be really annoying. I get that it was the point, and thankfully they don’t spend much time on the page, but I really wanted to reach through the screen and throttle him. But he sure did explain a lot about Hank!

While everything gets wrapped up a little too tidy for my tastes--usually--here I felt the characters, especially Hank, earned his ending. We join him in his growth and suffering so that when I got to the last page, I was completely satisfied--and all warm inside.

I’m such a sucker for Christmas stories.

The Kids Are Creepy

ParaNorman - When an army of zombies invades a small town, it's up to an odd local boy with a knack for communicating with the dead to save the day. But judgmental adults prove to be even more formidable adversaries.

(rent/buy) This animated film is worth at least one watch, although it may not suit everyone. It will be just spooky enough in the beginning to make a good Halloween flick, but the creep factor doesn’t last long (so no nightmares) as it provides a heartwarming, uplifting message in the end. Although this isn’t one of the great animated films, it has a simple plot for children and lots of subtext for adults.

Velvet Goldmine - A decade after British glam-rocker Brian Slade fakes his assassination on stage and disappears from view, tabloid journalist Arthur Stuart is dispatched to deconstruct the legend of the bisexual pop star.

(rent) An odd one. My biggest complaint was the sound mixing, which made hearing dialogue difficult when the background music was more in the foreground. Obviously music played a major role in this film, but it still made it hard to follow some things. The best part, I feel, is that while Arthur is figuring stuff out, he rarely tells the viewer what is happening or explains what he figures out. The watcher has to do that on their own.

Of course, that also means that some elements of the movie may remain a mystery to the viewer, or things may be interpreted differently by the viewer, but I think that adds an element of depth to the movie.

Edge of Seventeen - A 17-year-old rediscovers his sexuality in this 1980s story about coming out and its social consequences. Eric (Chris Stafford) takes a job at an amusement park and meets Rod (Andersen Gabrych) -- but finds out too late that his crush just wants sex. He seeks consolation at the local gay bar, only to be used again. As he continues to question his sexual orientation, a female friend (Tina Holmes) volunteers to be his next partner.

(rent) This movie seemed especially long. It was a slow-progressing flick as Eric came to realizations about his sexuality. It had its up and downs and played with what felt like a lot of stereotypes (although those stereotypes are based in fact, I assume). This story definitely looks at things and makes you think, but it’s not amazing either. Kinda middle of the road. I probably would have liked it more if it moved at a quicker pace.

C.R.A.Z.Y. - There are five boys in the Beaulieu family -- Christian, Raymond, Antoine, Zachary and Yvan. But Zac (played by Emile Vallee and Marc-Andre Grondin) is the only one who's gay. That's why growing up in Montreal alongside his heterosexual brothers and his strict, emotionally distant father (Michel Cote) proves especially challenging for the blossoming outsider, who finds solace in the music of Pink Floyd, the Rolling Stones and David Bowie.

(rent/buy) This is a fairly long running movie and a tad slow, but definitely worth a watch. It’s very much a family drama, specifically focusing on a father-son relationship, but it also looks at sexuality, child rearing, love, and family. I think what’s best about this movie is that while one of the motivating factors for some of the actions is Zac’s sexuality, there is so much more at play here.

The Kids Are All Right - Joni and Laser, the children of same-sex parents Nic and Jules, become curious about their sperm-donor dad and set out to make him part of their family unit. But his arrival complicates the household dynamics.

(rent) I generally found this movie to be lacking, but I know a good portion of that is just preference. The cover of the film makes it look happy and positive, but the film itself seems to be the opposite. While there are some good takeaway messages here, there are also lots of bad behavior. It’s all very real, but it doesn’t make it into a moving movie. I was bored for a good chunk, uncomfortable with several pieces, and frustrated the rest of the time.

The only interactions I really liked was between Laser and the donor, although Joni wasn’t too bad, as she can be forgiven, since she’s young. Mostly I found the characters to be selfish, unbearable, and poor representatives of humanity. Jules, especially, irritated me, both with her actions and how it presents her as a character, specifically a lesbian. Joni’s female friend was obsessed with sex and Joni constantly called her a slut. Both traits were irritating and seemed to be trying to say something that I don’t think the film got across.
Posted by Unknown at 21:47 No comments:

Labels: gay, kids, movie reviews, queer
Newer Posts Older Posts Home
Subscribe to: Posts (Atom)
"When I get a little money I buy books; and if any is left I buy food and clothes"
- Erasmus