The Saint of San Francisco by Jerry Sacher 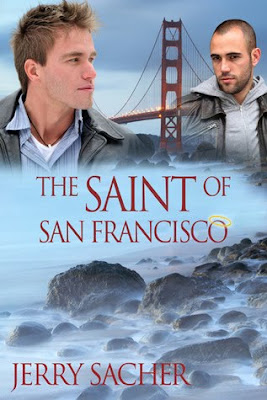 The Saint of San Francisco by Jerry Sacher
Stars: 2/5

Length: 245 pages
Blurb
After finding himself still depressingly single on his thirty-second birthday, Jeremy Haniver accepts an invitation to move to San Francisco. Though he falls in love with the Castro and the city, it’s not enough to cure him of his loneliness or the depression that dogs him. He almost throws his life away, but fate intervenes when Jeremy meets Mark Caparelli.

Mark is a former Marine and a detective with the San Francisco PD. Unfortunately, he’s also seeing someone else—at first. Life finally seems to be going Jeremy’s way, until a homicide breaks up his first date with Mark. Jeremy desperately wants to get over his past and start a new life with Mark, but they have to catch the killer first... before he catches them

Overall
This novel is an attempt at a murder mystery using a unique narrative style and a frequently changing point of view. While I applaud the attempt at stepping outside the box, too many problems arise from some of the choices Sacher made, which left me skimming through the story to get to the ending. Instead of breaking this story down into positives and negatives, I'm going to look at the different parts that caught my eye and why they worked--and why they didn't.

The Breakdown
Title. While I think the saint in the title is supposed to refer to Jeremy, I think it more aptly applies to Mark. Not only does Mark save Jeremy's life, but he also puts up with Jeremy for some reason that I can't fathom outside of love. There are moments were Jeremy is a good match for Mark, but there are other (majority) times where I wanted to smack Jeremy. Hard. Mark, however, despite some poor choices, puts up with a lot of crap, tries to protect the one he loves, and does his job.

Points of view. While my biggest complaint in some books is that they randomly begin skipping around the perspective pool, this novel at least consistently jumped around. The lead narrator (in first person) is Jeremy, but possibly so you don't kill him, we get third person perspectives from Mark and various other key voices. I know this caused complaints among some readers, but I didn't mind. I feel the concept can work well, and while it may not have been executed perfectly in this case, it wasn't terrible. However, I know it rubbed many readers the wrong way.

Voice. We are told off the bat that Jeremy is apathetic in his relationships, doesn't think he's (really) capable of loving someone, and gets easily bored with boyfriends (and dumps them for no particular reason). He's a hard guy to love, and he's the leading male. Because of his apathy toward his boyfriend, his friends, and many things in general, it's hard to want to hang around his head, which is why jumping perspectives is probably a good thing. He's slightly whiny, very stubborn, and sometimes annoying. Also, despite his many failings, he still has friends and has trouble seeing any of his negatives. Because of all of this, he comes across as a Gary Stu (the male equivalent of a Mary Sue).

The mystery. In general the mystery was pretty interesting. I liked how everything unfolded and Jeremy continued to dig up facts and get his nose into business when he really shouldn't have.

On the other hand...there were some really big issues with reality in the mystery, the story, and a few characters. Mark takes Jeremy to a crime scene; I don't believe that a murder case would just be "dropped" no matter who was asking; and there are various other moments that made me question what research went into it. Along these same lines, the murderer, when he's finally revealed, behaves erratically, has previously behaved illogically, and yet has acted perfectly rationally other times. I didn't buy it.

Requested this book for review.
Posted by Unknown at 20:42