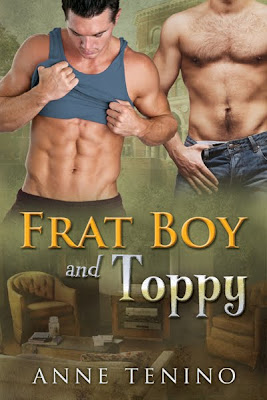 Length: ~170 pages (50,000 words)
Blurb
Brad is great at meeting other people’s expectations. But his own? Not so much. Take the gay thing. Okay, so yeah. It took a morning meeting with a frat brother’s hairy, naked ass for him to admit it, but he knows the truth about himself now. Let the gay life commence.

Unfortunately, it’s not that easy. He hasn’t quite determined how to come out to anyone, even Sebastian, the geeky-hot TA in his history class. Sebastian is everything Brad is not. Intellectual, suave, hairy. Out. And he doesn’t seem interested in Brad, even when Brad makes a fool of himself trying to catch his notice.

Score one for foolery: Sebastian does more than notice Brad; he takes him to bed. Brad’s been with plenty of girls, but with Sebastian, the sex is something else entirely—hot, mind-blowing, affirming, and a little domineering in a way that drives him wild. But when great sex turns into something more—dare he admit the “L” word?—Brad must face the crushing realization that Sebastian doesn’t feel the same. Unless, of course, he does. After all, even grad students can be idiots about matters of the heart.

Overall
I'm very hit or miss with comedic stories as my sense of humor doesn't align with others' humors in many ways. So while I probably missed a large chunk of what was meant to be comedy in this story, I also found there was plenty to laugh about too. In addition, while this is a fairly light story about a young man realizing and exploring his sexuality, it also mixes in some deeper elements without dwelling on them too much and losing the heart of the story. Sexy sexy-time, great characters, and generally amusing narrators all blend together for a fun story.

Strengths
These characters are fun, nice guys who think less of themselves without overwhelming the reader with angst. They both have some history, and while that is part of the driving force of the latter half of the story, it's not so heavy as to pull away from enjoying the lightness of the novel. In addition there is a varying cast of side characters, from Brad's goofy family to Sebastian's jerk roommate.

The simplicity of the story lends itself to focusing on the characters, which are really the strength of the story. However, the plot, while simple, isn't lacking, but instead captures an incident (and the surrounding incidents), blossoming outward to the end. Simple, yes, but satisfying.

Weaknesses
Some of the writing came across as a little stiff and awkward, mainly when Brad is narrating, and I'm not sure if the author was trying to differentiate their voices or not. In addition, Tenino was going for a very distinct style with a fragmented structure that worked for the characters and story, but some readers may find distracting.

I am affiliated with Riptide Publishing. Read as a proof.
Posted by Unknown at 20:51