Every Man for Himself: Ten Short Stories About Being a Guy, an anthology 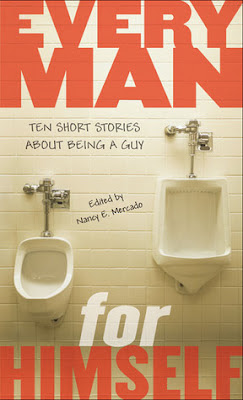 Every Man for Himself: Ten Short Stories About Being a Guy, an anthology
Stars: 4.5/5

Length: 176 pages
Blurb
What does “being a guy” actually mean? Some of the most talented writers are about to show you. In this diverse and original collection of short stories, ten well-known writers, including Mo Willems, Walter Dean Myers, Ron Koertge, René Saldaña, Jr., David Levithan, and David Lubar, share their stories about the trials and tribulations of being a guy. Sometimes funny, sometimes sad, and always honest, each story portrays the reality of being an everyday guy who gets a few life lessons and still manages to come out on top.

Overall
I really enjoyed these stories, which came from a variety of authors, most of whom I wasn't familiar with. However, while it's subtitled as "Ten Short Stories About Being a Guy," it could just as appropriately be called "Ten Short Stories About Being a Person." Because honestly, how big of a difference is there between guys and gals? Not much (beyond biologicals), since it all breaks down on an individual level. That aside, this was a good collection of stories and I think it'd be great for young "guys" to read, although I'd definitely recommend it to anyone. In answer to the blurb above's question: Being a guy is different for everyone.

Strengths
These stories had a good variation of topics that sometimes touched on heavy subjects but never lingered too long or too heavily and often the heavy subject wasn't the main focus of the story either, which was refreshing. Some of the topics include race issues, sexuality, changing friendships, family roles, and identity/cliques.

The writing was solid through out, and each author took a slightly different voice/approach, with one story presented in the form of a comic. And while each story was individual and different, there was never a jarring switch between stories, either. A good compilation.

Weaknesses
I think my biggest peeve with this book is the idea that men are so different from women that young men/boys need a guide to being a guy. As if they couldn't figure it out themselves. This annoyance is slightly placated by the fact that the stories aren't grossly "This is how you're a Man," and instead show a variety of how to be a man (or, you know, a decent human being). Feels like a sales ploy to me, much like all products "sold" to "men" or "women."
Posted by Unknown at 07:59