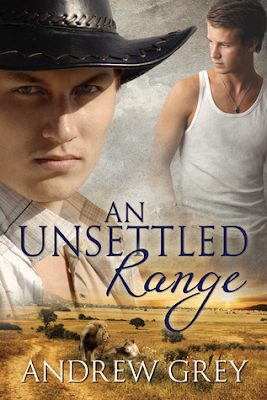 Length: 200 pages
Blurb
The last thing Liam Southard expects when he flees his abusive father is to be taken in by a couple of gay ranchers. Soon he has a new job and a new perspective on his sexuality, and his life starts to turn around. Then someone pulls a gun on him.

In Troy Gardener’s defense, the gun thing was a mistake. Between his marriage falling apart and living in his uncle's isolated hunting cabin, he's been a little edgy. He wants to make it up to Liam, and once he discovers how much they have in common, he wants even more. But with Liam's father popping in unexpectedly and a mining company threatening the ranch’s water supply, the only guarantee is that life is never going to be boring.

Overall
I'll be honest, I have a love/hate relationship with Andrew Grey novels. I'm pretty much always mediocre about them, but for some reason I can't resist reading them. I was mediocre on the first in this series, and yet when the chance came to pick up this one, I did. I have all of the Farm series. I swear, it's a compulsion or something. I know it's the soft squishy feelings that fill his books, the perfectly happy endings, the absolutely escape from reality.

Even when I'm sighing and rolling my eyes through the pages, I can't help enjoying it just a little. I also realize that a chunk of my eye rolling comes from reading a fair number *cough*8*cough* of his books and knowing pretty much how the story is going to go.

That said, this is my ninth book, with 10 and 11 in the wings. He definitely has a certain rhythm to his books, and An Unsettled Range follows course. Fans of Grey will like this, undoubtedly, naysayers will...well I wonder why they'd pick it up in the first place.

I liked the first in the series better, and I didn't read the second. Without further rambling...

Strengths
The mining company plotline is a nice mellow threat that lurks in the background and keeps all the characters moving and interacting. It felt pretty realistic, and any issues I had could pretty much be resolved with, "Well, it IS the government."

I love Grey's families. The children are there, important and involved without overwhelming the story or being forgotten. Here, Sofia is cute and precocious, an absolute 5 year old who holds grudges but also easily forgives. Jeanie is not-surprisingly likeable and while she's never portrayed as an evil woman, you can't help but feel bad for her and frown disapprovingly in the same breath. At least in the beginning when Troy is hurting. Telling what happens later would be a spoiler. Sort of.

I liked that the sex scenes spiced it up a little. While they were definitely tender and sweet, they had a taste of dominance and aggression. Not much, but the small touch was appreciated.

The relationship moved very quickly. Not much time passes before they are baring their souls and promising their love and devotion. I had trouble buying it, one because they both came from such tough spots, but also it's hard to believe anyone's relationship evolving so quickly. I know it happens, but this felt too Insta-Love for me.

Grey's writing doesn't make me want to plunge out my eyes with a wine corkscrew, but it does lack a certain originality. The language tends to explain an emotion behind an action that clearly expressed what the emotion was; gives excuses or reasons behind a behavior or reaction when it's either unnecessary or repetitive (or diminishes any mystery a person may have); or draws out a line that could easily be half as many words. While it's not bad, it leaves the story feeling cluttered and somewhat dragging.
Posted by Unknown at 19:21