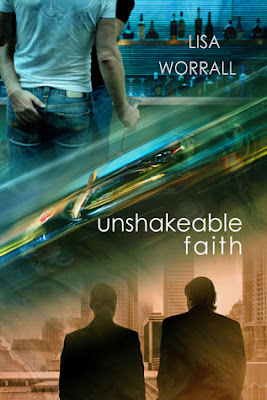 Length: 242 pages
Blurb
Of all the bars in all the towns in all the world, the stranger walks into Brody Tyler’s. With no memory and a name he chose from a newspaper, Nash is a gamble—one Brody is willing to take. It isn’t long before Brody and Nash fall in love, but then a tragic accident shatters their cozy world, resetting Nash’s memory once again.

The “new” Nash Walker is a businessman with a bottom line, and he doesn’t care what or who gets stomped on. Waking up in a hospital bed after a hit-and-run with no idea where he’s been for the past six months is bad enough, but someone trying to kill him is even worse. Enter Brody Tyler, accidental bodyguard.

Brody’s determined to help Nash remember and bring back the man he loves. Nash thinks Brody’s a drop-dead gorgeous pain in the ass. If only he could remember….

Overall
This is an OK read that left me struggling to suspend my disbelief and not roll my eyes at the series of cliches involving head injuries. The initial set up and character-personality switches works well, but I was pushed out of the story a bit too often, especially at the end. OK writing, interesting characters, and a good plot with mediocre elements left me lukewarm about this novel.

Strengths
The strongest part of this novel by far was the array of characters. Nash and Brody are interesting, and the supporting cast adds some nice spice to everything, from the bossy housekeeper and the well-meaning friend to the loving, no-nonsense mother. While it's hard to imagine Nash becoming a hard-ass when he's surrounded by family and friends, personal expectations do horrible things to people. I especially approve of how Nash's father was handled, seen as both a bad guy (tough with high expectations) and a good guy (a fair businessman and loving father). The cast made this story come to life.

The plot overall was an interesting concept, and although it relied on some weak building blocks, I enjoyed the situations the characters were put into. Brody facing the new, cruel Nash was a twisted hitch in their relationship, and Brody's struggles with handling this new lover was touching and sometimes heart-breaking. I appreciated that new Nash would have flashbacks of events that happened in the first part of the book, giving a sense that Nash was beginning to remember things.

The cover is very attractive and artistic, perfectly representing the book. The colors are soft and real and dry and bland split by a dizzying image of cars driving. Great representation.

Weaknesses
This story relies heavily on the head-injury trope, which while in itself isn't bad, it does mire itself rather deeply in it. The first head injury is fine, as memory loss is often a side effect of such a traumatic experience. The second involves a little bit of suspension, but is feasible. The third incident is too convenient and cliche, coming across as deus ex machina. As if the author didn't know how else to resolve it and so took a short cut. I think if the memories hadn't been handled so well prior to that point, the final incident wouldn't have bothered me as much. The complete personality change that came with the final incident also felt random, as if he was becoming a man he wasn't. Too convenient.

This novel is a realistic contemporary novel, which left me with two issues: One, when Nash goes missing the first time, I find it hard to believe that his family (who are wealthy and influential) didn't broaden the search enough to find him, especially since they should have known the area he was last seen in. The hospital would have contacted the police when they had a John Doe and things should have connected, especially since databases tend to be at least state-wide. Of course, if this had happened, the story wouldn't have gone very far. The second issue is when Brody gets the job as a bodyguard. While I can see him getting sent in accidentally, I found it hard to believe that Nash's mother hadn't checked into the names/resumes of people being sent to her to guard her son. Also, where was the man who was supposed to show? I found it hard to believe that the protective and loving mother would just take a person charged with protecting her son at face value.

Requested this book for review.
Posted by Unknown at 20:57