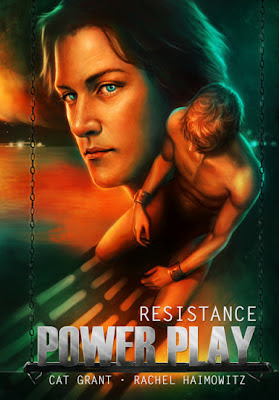 Power Play: Resistance by Cat Grant and Rachel Haimowitz
No star rating, since I read this for work

Length: 90,000 words
Blurb
Brandon McKinney has scraped and sacrificed for what little in life he’s ever had. Though it’s been fifteen years since he escaped his father’s abuse, the damage remains. Trust seems as far out of reach as his dream of becoming an architect, and though he’s come to accept being gay, he can’t deny the shame and confusion he feels at other urges—the deeply-repressed desire to submit.

Jonathan Watkins is a self-made Silicon Valley billionaire whose ex-wife took half his money and even more of his faith. Comfortable as a Dominant but wary of being hurt again, he resorts to anonymous pickups and occasional six-month contracts with subs seeking only a master, not a lover.

When a sizzling back-alley encounter cues Jonathan in to Brandon’s deep-seated submissive side, he makes the man an offer: Give me six months of your life, and I’ll open your eyes to a whole new world. Brandon doesn’t care about that; all he wants is the three million dollars Jonathan’s offering so he can buy the construction company he works for. But he soon learns that six months on his knees is no easy feat, and shame and pride may keep him from all he ever wanted—and all he never dreamed he had any right to have.

Overall
Warning: Hardcore. While consent is clearly established and frequently reaffirmed, some moments push hard against the outer edges of consent.

Despite moments of extreme discomfort that I had with this book and its events, I continued on, needing to know what was going to happen and how things would work out. I was richly rewarded, and I hope you will be too!

I am affiliated with Riptide Publishing. I read this for work.
Posted by Unknown at 20:06