Too Soon for Love by Kimberly Gardner 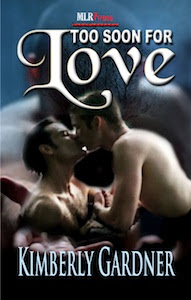 Too Soon for Love by Kimberly Gardner
Stars: 3.5/5

Blurb
Michael Stricker is still reeling from his partner's sudden and untimely death when he meets someone new, someone he could really care about. But first he needs time, time to get his life back in order and time to get over is lost love. But learning to live alone again is nearly impossible with his well-meaning relatives treating him like a poor helpless blind guy.

When Alan Stuart befriends Phillip DiMartino's grieving partner, the last thing he expects is to discover hidden lies and infidelity. Guilty over his attraction to the still-grieving man, Alan resolves to stay silent. But the truth has a way of coming out, and soon a dead man's secrets bring about more heartbreak than Alan could have imagined.

Although both men vow to keep their distance, staying away is easier said than done, even when it's Too Soon For Love.

Overall
Focusing on the concepts of forgiveness, second chances, and independence, this novel is highly enjoyable, if not a little slow moving. While the pace dragged at times, I never lost interest in the characters or what was happening in their lives, although I did want to slap all of them upside the head. More than once. In a loving way, of course.

Strengths
Writing was good and I'd definitely check out other books by this author. I enjoyed Gardner's style; it was to the point most the time and descriptive when it need to be.

Characters. Although I wanted to throttle them at times, I really wanted them to find their happiness. Both characters were distinctly human in their strengths and their faults as they fumble through a friendship, a relationship, and a friendship and then through the reveal of a dark secret.

Realism. The plot may have been outside my own experiences and maybe a little expected, but it felt more like a mirror than a story. The important part of the book are the characters, who all felt extremely realistic (except maybe Robbie, who felt a little plastic...but that is how some people are). It was the realism of the characters that kept me going through the story, plus the side characters were enjoyable with the little quirks they added.

Weaknesses
Pacing was slow or a little off. While I liked it for two reasons, it also was the hardest part for me to get through. It was appropriate because the grieving partner needed time to heal and find himself, so the story needed time to grow for that reason. Also because they went through a soap-opera like series of emotions, we were given the time to be introduced to various side characters who eventually brought everything together in the end. So the length/pacing isn't horrible, just slower than I may have liked.
Posted by Unknown at 19:16