Between Sinners and Saints by Marie Sexton 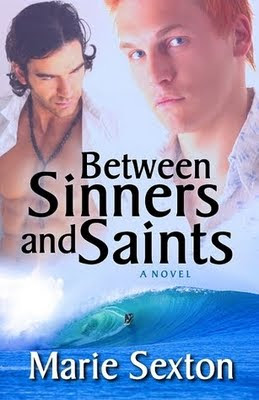 Between Sinners and Saints by Marie Sexton
Stars: 5/5

Blurb
Levi Binder is a Miami bartender who cares about only two things: sex and surfing. Ostracized by his Mormon family for his homosexuality, Levi is determined to live his life his own way, but everything changes when he meets massage therapist Jaime Marshall.

Jaime is used to being alone. Haunted by the horrors of his past, his only friend is his faithful dog, Dolly. He has no idea how to handle somebody as gorgeous and vibrant as Levi.

Complete opposites on the surface, Levi and Jaime both long for something that they can only find together. Through love and the therapeutic power of touch, they’ll find a way to heal each other, and they’ll learn to live as sinners in a family of saints.

Overall
This is a long and beautiful piece that follows the journey of two men whose chance meeting leads both of them to emotional growth.

The most challenging part of this novel is that it's pretty long, compared to some of its peers, and is slow moving. But I can't mark that was a weakness because rushing this story would have ruined it. It requires a gentle hand to guide the reader through the delicate situations and build up to the climax. Even though this isn't what would normally be considered a "page turner," I found I couldn't put it down.

Strengths
Writing. Very enjoyable and well done! Also, I can only assume Sexton did this on purpose, but after reading the first chapter (narrated by Levi), I was enjoying her writing style. then we switched to Jaime and I was surprised at how stiff it felt. Only after we switched back to Levi did I realize that the writing was expressing Jaime's own discomfort with life and his own skin. As Jaime progressed, the writing balanced out as well. I don't know if it was done on purpose or was a result of the author "getting into the character's head," but it worked.

Characters. Both characters are charming (in their very different ways) and wormed their way into my heart. Levi is tough and stubborn, rebelling against his family and living life to its fullest, mostly in the forms of sex and surfing. Jaime is scared, but stern, and truly a good man. These two work beautifully in their opposites, not water and fire, but each fire while being air to one another. In addition there is Dolly and the Binder family, which at times is confusing but kind of amazing.

Religion. I love religious themes in books, and this one was especially well done. The representatives of religion are varied and realistic and although their perspectives clash with one of the main characters (and probably the reader's), they are not so horribly offensive as to be ridiculous (or like beating a dead horse). In addition, the story works mainly with Mormons, a group that tends to get more stereotypes than other Christian sects, which was refreshing.

Progress. While I enjoyed almost everything about this book, the progression of the characters—including the people and situations that perpetuate the change—is my favorite. These characters need each other and that need and the subsequent satisfaction of that need is well done. The author took the necessary time for the characters to know each other and help each other. There were no quick fixes (except maybe one). Sex wasn't the answer (not that it didn't help). People acted like people, and although there was no great evil to fight, the end of the novel feels like a victory.

Weaknesses
There is one small niggle at the end which made my nose scrunch a little in disbelief, but it was a minor thing (although it was rather major in the character's lives), which I was willing to forgive because of how much I enjoyed everything else. Mainly it's a timing issue where certain relationship events felt rushed. Very minor.
Posted by Unknown at 13:02