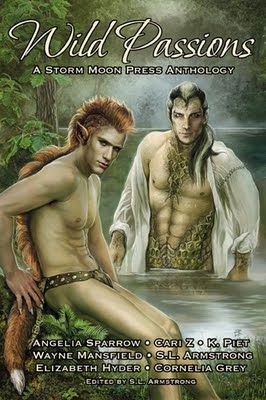 Overall
Lions and tigers and bears, oh my!

Even if furries aren't your thing (they aren't mine), if you're comfortable with some anthropomorphic and human-crosses, then this anthology will be worth a read. If you like furries, then this is definitely the book for you. It covers various types of crosses, including one alien, and unless you're completely grossed out by humans with animal traits having sex with humans, there is nothing particularly offensive in this set. The stories that unfold are excellent, looking at social expectations and prejudices while including a romance and happy endings.

City of Foxes by Cornelia Grey
A strong story to start the collection, we are sunk into a futuristic world where fox/human crosses have evolved and humans, as they tend to do, want to destroy them. Our narrator is a human who saves one of the fox people and is in turn saved by the fox people who take him to their shelter to rest. The story unfolds as the two main characters learn to tease and trust one another while unrest builds in the fox community. Along with an interesting plot, there are dynamic characters who worm their way into the heart, all topped off with a strong writing style.

Trust Me by Elizabeth Hyder
A strange combination of funny and serious, this story started off a little weak but strengthened as the main character stopped being a player (and a selfish jerk) and met his foil in the form of a love interest. While who it ends up being didn't come as a surprise to me, I imagine the reader is supposed to be in on the joke. The story was good for what is was--an attempt to be slightly humorous with some more serious (but not dark) undertones. While it left me with very little impression (I had to go back to re-read a bit for this review), there was nothing so wrong with it that I'd mark it as bad. Maybe just not to my liking.

Alpha's Pride by SL Armstrong & K Piet
This story starts hot and heavy and ends hot and heavy, with love and pain as its filling. Aside from one moment of "I hope those claws are retractable," it was a well-executed story about the good of the clan overcoming the individual's pride and the benefits the individual can reap from that. The main characters struggle through their personal emotions and what they know they need to do while still loving one another. It is a touching, and at times heartbreaking, story.

I Do Like to Be Beside the Seaside by Wayne Mansfield
This is the weakest of the anthology both in story and writing. Initially I would have ranked the writing as mediocre, but after the first sex scene, the weaknesses become apparent as the characters became cardboard cutouts whose emotional trials were too easily solved by hand waving and a quick paint job. The characters had potential—an interesting back story while facing a difficult problem--but too quickly trusted one another and fell in love, leaving me to start to wonder if this was supposed to be a comedy.

Opening Worlds by Cari Z
In this futuristic space story, there aren't so much animals as aliens, but the important parts all work the same. This well-written story explores sex vs. love, the different social requirements of different planet societies, and the individual's required duties to society. This story made my chest ache with the longing that the narrator felt and it was superbly constructed. While the end may be considered to "work out too perfectly," I found it good--especially since the alternative would have made me cry. I think if this had been a novel, the author would have explored things more in depth, but as it stands, the ending worked. This was one of my favorites.

Songs for Guitar and French Harp by Angelia Sparrow
This was an interesting story, a sort of alternative history during the 1930s/1940s where creatures called constructs exist. In essence they are animals with souls, although how much of them (physically) is human, I'm not exactly sure. They are animal enough in appearance that no one would mistake them for what they are. The story is surprisingly dark (compared to other Sparrow works I've read), and I thoroughly enjoyed the look at carnival life and the struggles the main bear goes through to get his mate back. Some things at the end tugged me from my suspension of disbelief--I just didn't feel they needed to be told in the story--but for the most part this long story is an excellent tale of misfits banding together and protecting one another in the sweetest way they can.

Note: Received a copy of this story for review.
Posted by Unknown at 07:26