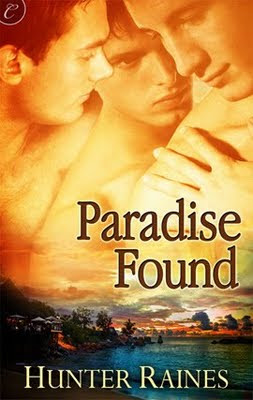 Characters/development. I think I fell in love with these characters almost immediately. They are all good men who have minor faults (most of which includes being embarrassed about something and lack of communication), and by the end of the second or third chapter I wanted them happy (and preferably in a big pile of naked...which is related to them being happy). While some of the head skipping was confusing (it may be my copy, but there was no indication sometimes when we went from Philip's head to Cameron's, etc), it wasn't confusing enough to disrupt the flow of story. Fun characters to spend the afternoon with.

Weaknesses
Financial believability. There was a bit too much money floating around at times, which worked for the plot, but left me wondering where it came from. Philip obviously came from/had loads of money, but Mark and Cameron weren't in high-paying jobs (necessarily), and at one point they seemed to get a week's vacation without much notice, unless I missed a time skip. This is a minor snit, but too many stories depend on magic money that it feels necessary to mention. However, it doesn't distract from the overall story and the issue only arises once.

Note: I requested a copy to review.
Posted by Unknown at 19:42