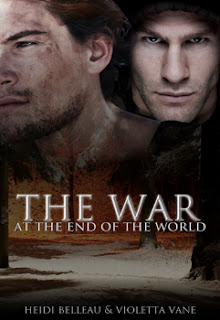 The War at the End of the World by Heidi Belleau and Violetta Vane
Stars: 4/5

War correspondent Joseph Byrne has been cheating death all his life, ever since he spent two years in an iron lung as a boy diagnosed with polio. In the years since, the Fetch, a strange being charged by Death with collecting Joseph and transporting him into the unknown, has been condemned to watch and wait.

Now, with Joseph working in a Finland caught in a tug of war between Nazi and Soviet forces, it seems a foregone conclusion that the Fetch's sentence is at its end and Death will have Joseph for her own at last. Joseph, an openly Jewish American, has no doubt where his allegiance lies, no matter the danger. But after all these years at Joseph's side, watching him overcome adversity to grow into a brave and principled young man, the Fetch has come to realize that there are forces stronger and so much sweeter than even the purpose you were made for.

Overall
These two authors always take me for a ride, never knowing if I'm going to like the ending, but never disappointing, even if they break my heart, and this is no exception. This is a refreshingly different story that takes place during WWII mainly, but in Finland rather than the standard locations. Once again Belleau and Vane bring the supernatural into a mundane world, creating something terrible and beautiful that leaves an impression.

This is a very different love story, as we are trapped in the perspective of a guiding spirit that is meant to gather the souls of the dying and take them to death. But the one we are in has been delayed from his purpose and again and again is unable to take the life of his charge. It's a moving, sad, painfully tender tale as he struggles with knowing his duty and knowing they are running from death, but unwilling to cause suffering to Joseph. The end is beautiful and a little painful, but ultimately satisfying.
Posted by Unknown at 12:39