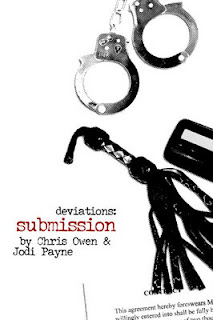 Length: 244 pages
Blurb
Tobias is a skilled Dom, able to bring even the most hesitant submissive around. Noah is a man in need of just that. He wants to sub badly, but has yet to find someone he believes can take him where he needs to go. Through a series of encounters in the world of bondage and discipline, Noah reveals why he has trouble trusting, why he needs such a firm, steady hand. Tobias may allow himself to dominate, but he has trouble letting himself love. Still, Tobias can't resist Noah's charms, and the two of them set about making a scene for themselves, one that works for them and their unique set of problems. They learn to love, but can they stay together while they explore each others' secrets, in a world where all is laid bare and emotions run high?

Review
Tobias and Noah are an interesting pair that both bring something--good and hard--to the relationship. Despite both having some issues, it very much feels from their first interaction that these two men are meant to go together, whether just for the kinks or for love too. Because of this, and fighting against my overall mediocre feelings about the book, I do want to continue the series to see how they progress. Of course, with a backlog of books to read, it's hard to justify continuing a series that doesn't earn a higher rating from me.

On the other hand, the kink was well done, sexy without being porny, almost educational, and patient, if that makes sense. While sex is involved, the focus is on the psychological and emotional development of the characters--especially Noah--and how Tobias gives him what he needs as a Sub. They cover a variety of kinks (bondage, paddling, role play), but nothing is too hardcore, maybe because this is the first book, maybe because Tobias doesn't want a pain sl*t.

For how long this novel is, not much happens. Obviously part of it is the lengthy scenes that develop the relationship and character, but even that is a slow progression. It wasn't a hard read or a boring one, but it wasn't a page turner either, as there was no suspense as to what was going to happen--although it could be that the suspense is stretched more tamely over multiple books. The end doesn't feel like a huge resolution or end, again linked to the fact this is a series, and enough was left hanging that it raised a brow, but for readers already planning to read the entire series, this won't be an issue.
Posted by Unknown at 21:52