The Rare Event by PD Singer 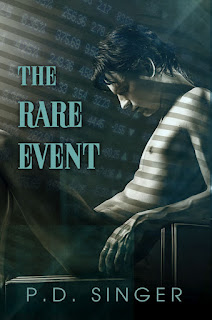 Length: 350 pages
Blurb
Hedge fund trader Ricky Santeramo has it all: money, looks, and fellow trader Jonathan Hogenboom. The two couldn't be more different: Jon is from old money, while Ricky clawed his way out of blue-collar New Jersey. Jon hedges his positions; Ricky goes for broke. Jon likes opera and the Yankees; Ricky prefers clubbing. Jon drinks wine with dinner; Ricky throws back a beer. Jon wants monogamy… but Ricky likes variety. Bankrupt airlines are facing strikes, the housing market is starting to crumble, and Jon can’t wait any longer for Ricky to commit. One last night alone and one last risky trade make Jon say, “Enough.” Then Jon’s old friend Davis comes to New York City, ready for baseball and forever. The whole world is chaos, but there are fortunes to be made—or lost—and hearts to be broken—or won. Faced with losing it all, Ricky must make the savviest trades of his life and pray for a rare event. His portfolio and Jon's love are on the line.

Overall
This is a well-written, well-told story that toys with not being a romance, but ultimately harkens back to romantic roots. The focus of the story is Ricky and Jon, but much of the plot involves finances and stocks, which distracts from the romance, but is a (as far as I can tell) well-researched story of its own.

However, despite how good the financial tension is, I glossed through most of it because while it reflects on the characters and is involved in their development and actions, the details weighed down the flow of narrative, especially for one as financial disinclined as me.

I would still recommend this to readers who don't demand a 100% romance story. This has a good, elaborate (but not too overblown) plot, a great cast of characters, and the leads both learn something (although one definitely learns more...I'll let you guess who!). This story is good, but not amazing, and while worth the read, the heavy financial elements may turn many people off.

Review
There is plenty of drama happening in Ricky and Jon's life, whether it's the stocks, their 'open' relationship, or their skeevy sexual-harassment happy boss. The main conflictis Ricky's inability to be monogamous and Jon's desire to have just that from him. Running parallel in theme and relationship dynamic is Ricky and Jon's work life, where Ricky is the maverick and Jon is the secure buyer. These contrasts bring the characters head to head throughout as Jon begins realizing what he wants from life isn't what Ricky is willing to give him.

The drama is all interesting, although the financial speak is pretty heavy and, for me, interrupted the flow of action. However, I can't say that it's unnecessary, as much of the action centers around the stock market, so being given all the information helps the reader understand what was going on. My personal preference would have been for less of it, but I don't think it necessarily detracts from the novel for all readers. However, readers should go in expecting a ton of stock talk.

I think the weakest element of this novel was the role Spencer played, both historically and currently. His present role isn't bad, but I found it hard to swallow (even though I saw it coming) that he would behave as he did in the past. While highly unlikely, I suppose it isn't completely impossible, and I can understand that it was a needed force for multiple other things in Jon's life. However, it stuck out as being such, detracting from its believability.

Jon is an easy character to empathize with, as he's a generally nice guy who's in love with a man who is bit of a player. He has his faults, but they are minor. Ricky is a bit harder to like, as he's a player (although honest about it), a risk taker, and while not a bad guy, he tends to be more selfish. At times it's difficult to understand what Jon sees in Ricky, but I never questioned Jon's love for Ricky. He recognizes Ricky's faults (or at least faults as far as the relationship he wants to have goes). Their relationship and their unique development as characters drive the story, and it's a wonderful unraveling of people and their emotions.

Requested this book for review.
Posted by Unknown at 07:11