It's Not Shakespeare by Amy Lane 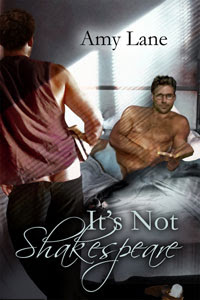 It's Not Shakespeare by Amy Lane
Stars: 3/5

Length: 178 pages
Blurb
College professor James Richards is in a rut and feeling his age. He moved to northern California to escape heartbreak and humiliation, but so far the only good thing to happen to him has been his Boston terrier, Marlowe. Then James’s toughest student sets him up with her best friend. Rafael Ochoa is worlds apart from James—chronologically, culturally, and philosophically—but he’s also beautiful, kind, and a shot of adrenaline to James’s not-quite-middle-aged heart. Together, the two of them forge a bridge between James’s East Coast sensibilities and Rafael’s West Coast casualness, but can their meeting of the hearts survive James’s lack of faith in happy-ever-after?

Overall
This sweet little tale reminded me of one of Lane's other works If I Must, mostly because of the Latino*/white pairing. It's just as wonderfully cute as that, although it has fewer kittens (but more dog), and less neurotic white guy (and more older, scared-to-commit white guy). Despite the similarities, it really is a story unto its own, and worth picking up, especially if you want a yummy snack.

Review
There isn't much meat to this story, but it isn't all candy either. It's more like a trail mix--yummy, tides you over, but doesn't completely fill you up. (I make a lot of food comparisons, don't I?)

Rafi is fun and fresh, just want James needs. (Plus he's drop-dead sexy, which, you know, doesn't hurt.) And while he's a good deal younger, he isn't looking for a sugar daddy—which is good, because James has been burned in the past from that type of relationship. Rafi seems perfect for James, and while we don't get an extensive idea about what Rafi sees in James, the reader can tell Rafi is absolutely into him and James is a decent enough guy (sweet, intelligent, although, he admits, though not in so many words, WASPish). They are a fun couple and while we don't get much of them, I think it was a good amount—enough to develop their relationship (albeit, very quickly!) and show us the conflict without dragging it on. In addition, there is a bonus story at the end which previously ran as a free story on a GoodReads group.

I had a few niggles with the main conflict, which mostly revolved around the saying of "I love you," but nothing dramatic enough to cause issue. I also felt the conflict that arises with a fellow professor was a bit odd, but again, nothing that stuck out like a sore thumb. Those were the only weak spots, and they did very little to detract from the story.

Of course the English geek in me thoroughly enjoyed the undercurrent of literature discussion/references, from James's dog's name (Marlowe) to the title of the story. It added a nice taste of James's personality to a story that is drenched with Rafi's personality and flavor (since James is discovering all the things Rafi likes).

One final thing: Some may find Rafi’s character and his family to be slightly stereotypical, but I felt it was just portraying one family who happened to be slightly more traditional. It didn’t bother me, and it may not bother most, but for sensitive readers, it may be worth investigating further.

Cute, enjoyable snack, worth the calories!

*(If Latino isn't the right word, tell me, as I suck at getting Latino/Hispanic/Etc right! But I think Latino is right here, as I know one is Mexican, and I think one is Puero Rican, but I can’t recall.)
Posted by Unknown at 21:09

This is a great post, thanks for writing it