Free Me by Brita Addams 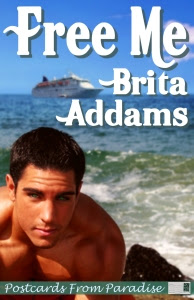 Free Me by Brita Addams
Stars: 3/5

Length: 24,000 words (97 pages)
Blurb
Dr. Bryan Newcastle needs a respite from the grinding responsibilities of his medical practice. He's looking for someone to free his mind and body, to take him to the sexual heights his ex-lover had stifled.

Bryan meets Phil Sanderson, a sexual dom looking for a vacation sub. With a key card slid across the lunch table, Bryan is plunged into Phil's decadent world, where sexual submission is only the beginning of what Phil wishes to show Bryan.

Phil brings his sub to new heights, but seven days isn't enough. Will Bryan and Phil be able to return to their former lives or has Phil just started Bryan's journey to sexual freedom?

Overall
A quick love story that was plenty sexy but left me unsatisfied. Some elements may be specific to me, and if you want a steamy summer read, this could be it. Definite focus on hot...not plot.

Review
Going in, I knew this story was going to be heavier on the sex appeal and lighter on the other elements, but I still felt it was lacking. To some extent, you need to suspend disbelief, especially depending on your feelings of love at first sight (or its many incarnations). I struggled at the beginning with these two men feeling much of anything for one another above the belt, but as the cruise came to an end, I sympathized with Bryan's emotional struggles and his desire to avoid Phil in order to numb the pain.

So I could buy that they felt very intensely about one another...but the ending still left me wrinkling my nose. It felt rushed to the point of unfinished, and I couldn't buy that all the answers were given. Because there are more books with the characters, the conclusion is obviously on going, but I still felt a little side-swiped by the ending.

Still, if you're looking for two guys who get hot and heavy with some spanking and commands, some light emotional plot, but not much else, this will be a pleasant beach read.
Posted by Unknown at 07:15