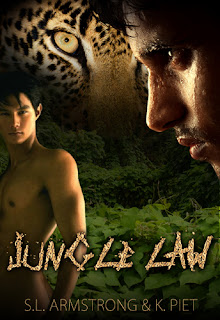 Length: 27 pages (11,000 words)
Blurb
There is a rainforest in India that the wise poachers avoid. Few who venture in ever return, and those that do rarely come back all the way. The leopards in this forest have a protector who walks the worlds between leopard and man, but who calls the leopard kin and the human only enemy. When a frightened boy escapes from the latest hunting party to feel the protector's wrath, he tracks the boy down, determined to leave no survivors. But when he comes fact-to-face with the exotic, defenseless boy, he cannot bring himself to end that life. Instead, what he has reviled for years becomes his constant companion. That is, until the humans dare to set foot in his forest once more.

Overall
First off, I was sold when a few pages in the authors used "female peafowl." True they could have gone with peahen, but maybe they didn't want to confuse readers. Anyway, that was a giant bonus in my big book of geek.

The writing felt a little stiff to me, but this is probably an attempt to capture the narrator's voice. Not that he's dumb, but he's more concrete in his thoughts, being as he's more in touch with his animal side. This bothered me a little, but not enough to disrupt my enjoyment of the story, which felt a little like The Jungle Book meets Beauty and the Beast. A nice combo. It's interesting that we never see from Deshi's perspective, since he may be the easier to relate to, and probably the more sympathetic character (not that Kaanan isn't a nice guy). Instead we are left to see things from Kaanan's perspective as he stumbles through understanding his little human.

A bit too much sex for me, but I know I'm biased. Still, everything was well done, and while shifters are a very popular (maybe too popular) choice, we get a slightly different feel with this shifter who lives in the wild and thus doesn't confront many of the "issues" that normal shifter story's deal with.
Posted by Unknown at 19:31