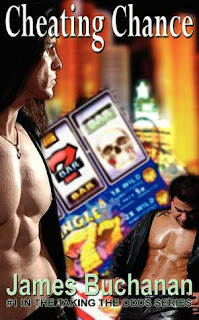 Length: 183 pages
Blurb
Vice Detective, Brandon Carr, despite his tattoos and bad-boy cool, lives in the closet with no intention of ever coming out. Then he meets Nevada Gaming Agent, Nick O'Malley, at a Goth convention and his perfectly constructed world starts to crack. Nick's passions for him, a restored hearse and rope bondage might drown Brandon's will. With the odds stacked against them they try to move from simply sex to something more. Sparks fly as the pair probes a world of cheating, murder, drugs and money laundering. The investigation repeatedly derails their relationship, finally forcing Brandon to choose between staying in the closet and saving Nick's life.

Overall
Don't judge this book by it's cover! Especially if you have the cover I did, which is a--I assume--Native American man (shirtless torso) in the foreground, a general casino backsplash, and a (shirtless torso) man in the middle ground who I assume is trying to be sexy but kind of looks in pain. I started reading it because 1) I got it free from MLR Press 2) I needed some bad fiction. Sometimes I just get my hopes up and they are dashed, or I know a story is going to be good but painful (emotionally) to read. Bad books rarely move me.

So imagine my surprise when this wasn't a bad book! The opening is a little rough, but the characters sucked me in, the plot was great, and I really enjoyed reading it. Even the parts I found weak (which I'm guessing is extremely personal preference), were easy enough to skim through and still enjoy.

I'd recommend this, especially to readers who like light mystery novels (where there is a mystery, but it shares the spotlight with the romance.

Review
So the cover I have is BAD, but GoodReads tells me it's not the only one, so hopefully it was improved in other incarnations. If this were a print book I'd be embarrassed to hold that book in my hands. Thankfully it wasn't and I was able to dive into the story.

I had some issues in the beginning, I suspect mainly because the early chapters are heavy on sex and sex isn't really my thing in general, and this tended to be, while not porny, definitely a more sexualized encounter. And some of the sex dialogue makes me giggle, but sex dialogues tend do that. So it starts with Nick and Brandon meeting up at a con and having lots of yummy sex. They return to life and that's when things get interesting.

The development of the murder mystery storyline is blended seamlessly into the story, providing all the necessary information to solve the whodunit while not feeling that the characters are being dense or that the author is withholding information. In the beginning of the unraveling, everything feels natural and part of the story, not highlighting any specific events as part of the larger plot. Obviously as the characters begin to actively pull on strings, the events become more forced as they are the ones forcing things to happen. Still, it was all effortlessly pulled together. A word of note, this is not a suspenseful novel that makes your skin crawl and nervous glances over the shoulder. Overall it's as sunny as the location where it takes place.

These two guys are fun, quirky, and sweet. They like goth culture, being tied up, and hard screws in the night. I liked them and I liked their relationship, when they were together, and despite a somewhat hanging ending (since this is part of a series), it has a closed case and is hopeful.
Posted by Unknown at 20:56