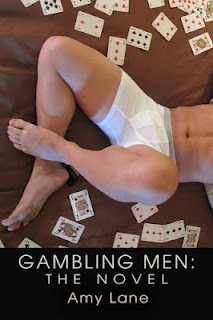 Length: 220 pages
Blurb
Quent Jackson has followed Jason Spade's every move in business and in poker since their first day as college freshmen. Eight years later, when Jace finally decides Quent is the one man he can't live without, he sees no reason for that to change.

But as much as Jace believes that poker is life, no one gave Quent the same playbook. After their first passionate night, the real game of love and trust begins, and Jace has been playing alone too long to make teaching the rules easy. Jace only speaks two languages: one of them is sex, and the other one is poker. Between the two, he needs to find a way to convince himself to take a chance on love—and Quent to take a chance on him. It's a lucky thing they’re good at reading the odds, because they’re playing for keeps, and this is one high-stakes relationship that's definitely worth the gamble.

Overall
If I ever need an upper, I turn to an Amy Lane book, and Gambling Men was no exception. This book is a bit different from some romances in that usually a good chunk of the story is the characters meeting and slowly coming together, or coming together for the first half and then dealing with issues the second half. Instead, our two leads have been long-time friends and in the first chapter they hook up in the most carnal definition of the word, and a relationship blooms from there.

I thoroughly enjoyed the characters, how much fun they have with one another, and each admission of love that Quent had to pull from Jase every so many chapters. Since I, like Jase, enjoy the hunt, I felt the building of the relationship went slow for me, but ultimately it left me satisfied and I trusted Lane to lead me to the right place. She did not disappoint. Lane fans and readers who want something soft (with hard edges) and frequent bubbles of joy should definitely pick this up.

Review
While this is a good books, I didn't enjoy it as much as other Lane books, primarily due to the focus of the story being on the continuously developing relationship. Although that isn't a bad setting, it did make the story movement slow (for me). It didn't drag, per se, but because there was little propulsion, the plot ambled along with the characters, motivated by small jumps and lurches. Because of this I think the story would work well for a beach read--picking it up at leisure, since you don’t have to tear yourself away from it to go enjoy something else.

Along the same vein, this story almost feels like a series of long vignettes, where we experience highlights of these two men's relationship. Of course in this case the tales all tie together into one story, but there isn't really a climactic moment or primary struggle. Instead they are just two men dealing with their relationship and trying to get over the personality traits that can make relationships difficult. Again, not a bad thing, but not terribly riveting either.

The dance between these two men and their incessant poker references is sweet, cute, adorable, frustrating and overall the best parts of the book. Sometimes I wanted to smack one of them (mainly Jase), and tell him to stop being a twerp, but for the most part I was charmed by them, even when Jase is being an idiot. Because despite his habit of making things harder than they need to be, it's obvious he's struggling not to be a jerk about things and it's only the behavior of a scared little boy coming out in the shape of a grown man.

There's a wonderful family theme in this story, both blood and created, and the group of friends that surround Quent and Jase is funny, and they are supportive of the two men, even when making snide comments. It felt realistic because they weren't perfect, they had some problems, they dealt with them, they overcame things and failed in others. All the supplementary cast was well applied and a nice complement to the story as a whole.
Posted by Unknown at 20:43