In All Your Ways by Cari Z 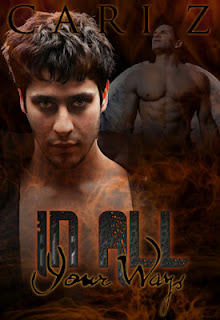 Length: 26 pages (10,000 words)
Blurb
During Heaven's rebellion, the angel Renat fell to Hell for loving the angel Emiel more than God. His punishment was harsh: he became a demon. Millennia later, Renat has long given up hope on ever reuniting with his love, finding what little pleasure can be found in the lands of the damned. He's shocked when an angel is found at the borders of Hell, and he quickly realizes that Emiel has finally followed him into Hell. Renat knows he will have to fight to keep Emiel from being torn from him, and the only one who can save them is Satan himself.

Overall
A story about angels--especially fallen--are right up my alley, so within the first few lines, I felt pretty secure that this story was going to get a good rating from me. That being said, a poorly written or formulated story with fallen angels that screws up still won't satisfy! However, this story is equal parts heartbreaking and sweet, with Renat's struggle as he loves Emiel and is rejected--by him and by God--and is cast down into Hell.

While the idea of some of the fallen angels being cast out because of loving another more than God is not new, it also fits within the 'doctrine' that has become popular regarding the angels and the fall. There are a lot of religious implications in this story that fit with Christian themes (while others are arguably outside that realm), with the more modern forgiving God and the angrier cast-out-the-angels God. There is also a wonderful theme of "fulfilling God's role," which is somewhat horrifying, but also kind of nice. The way all these different threads come together make a wonderful tapestry, creating a short, poignant story within a colorful world that leaves room for further exploration while also satisfying the reader's wants.