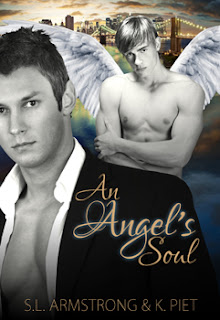 Length: 30 pages (12,000 words)
Blurb
Cole had everything: a great education, his own company, money, and Daniel, his lover since college. But in gaining everything, he lost the one thing he'd been building that life for: Daniel. Now that Daniel has moved on, Cole is without direction or purpose. Turning to alcohol and drugs to fill the void left behind, Cole dives head first into a downward spiral, unaware that there is another who loves and cares for him.

As Cole's guardian angel, Raziel has watched Cole since birth, and his love for his ward is deep and abiding. Witnessing Cole's fraying life breaks Raziel's heart, and when the thread that binds them together wavers during an overdose, Raziel breaks all the rules just to keep Cole alive. The consequences are unthinkable, but a life without Cole is a loss that Raziel simply can't conceive. An angel's soul was made to love, after all, and if he saves Cole, perhaps he can show Cole how the end of one great love doesn't mean another waits patiently for him.

Overall
A well done, if somewhat typical, tale of a guardian angel falling in love with his charge. This was obviously working within the constraints of a short story, and to some extent Cole's feelings toward Raziel felt a little forced, but this could be because we see so little of them together, but Raziel’s reasoning for why Cole feels the way he does makes sense as well. Still, I would have liked to have seen more of Cole's struggles and surprise at his feelings toward Raziel.

Most of my issues with this story are personal peeves, and I think in general many readers will enjoy it. Cole seems to have so much going for him in life, but losing the one thing that meant the most to him is something he can’t seem to bounce back from. His struggle to accept Raziel and begin to open up and trust, and love, another being is a wonderful exploration of the heart.

Despite the above, I did enjoy the story and it's definitely worth picking up!
Posted by Unknown at 21:52