Moving in Rhythm by Dev Bentham 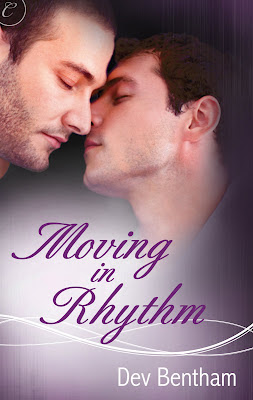 Length: 173 pages (42,000 words)
Blurb
Mark Apolostolos should be able to have any man he wants. Handsome and smart, he's also cripplingly shy, especially around attractive men. Tired of waking up alone, he's desperate to conquer his insecurities and have a real, meaningful relationship.

He gets his first opportunity when he tags along to his sister-in-law's dance class and lays eyes on the sexy instructor. Seth Miller has a way of moving that takes his breath away. It isn't long before sparks fly and they share a steamy kiss, but Seth wants much more than just a casual encounter.

If Mark wants a real relationship with Seth he'll have to come to terms with his sexuality—but will it be enough to break through the walls he's built up around his heart?

Overall
A sweet romance between a man who is pathologically shy and attempting to step outside his comfort zone to support his sister-in-law, and a dance instructor who has a thing for quiet, muscle-y guys. One of those stories where not much happens and even the drama is limited, but it's perfectly sweet and an enjoyable stroll through their lives. What really brought this story to life is the characters and their earnest emotions and honest helpfulness. A great feel-good story.

Strengths
The characters in this story are honest, good, and fun. I think Claire is my favorite, and even though Seth feels like the least explored character in the story (aside from those not really appearing on screen), I liked him. Their romance was a little thin to me, but considering Mark's struggles, it would have been hard to give much focus to Seth when Mark was so wrapped up in himself. Mark is a wonderful "broken character" because he flops between wanting to change and not wanting to bother, Lisa is a good pregnant woman (aka, not stereotyping), and the mix of all the people together was just a very pleasant experience.

Some of what really caught my eye were the descriptions, specifically of Seth's movements. The author took obvious care in describing his grace and poise, but I think my favorite was the dance routine, which I could easily picture.

This is a sweet story. That's what it's meant to be. Touching, tender with a little bit of sexy. It deals with a harder issue, but doesn't go too crazy exploring it and instead sticks to the person who has the issue and what he's going through. A pleasant read.

Weaknesses
I can't think of a weakness of hand, although this isn't a very enthralling story (per se). It was definitely good, excellent even, and I wanted to keep reading and keep reading so the characters would get their happy endings and resolution, but not much happens outside of Mark's struggles. Of course, that is the point of the story, so I don't score against that, but it might not be a book for everyone.

Everyone in this story makes me feel like a couch potato. Mark works out a ridiculous amount of time, though I imagine his profession gives him that sort of time. Still. *whines*

So overall, while I can't give this story a 5-star rating (it wasn't quite that good), this is definitely one I'll be coming back to again.

Requested this book for review.
Posted by Unknown at 20:34