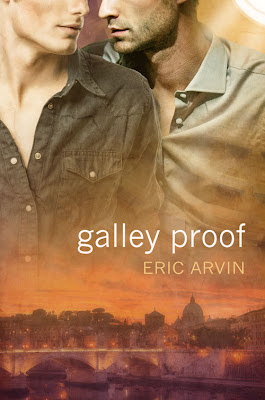 Length: 200 pages
Blurb
Fiction writer Logan Brandish is perfectly happy in his peaceful small-town routine with his best friend, his cat, and his boyfriend—until he meets the editor of his next book, the handsome Brock Kimble, and the lazy quiet of everyday living goes flying out the window. Faced with real passion for the first time, Logan becomes restless and agitated, and soon his life and his new manuscript—a work in progress he’d always thought would be completed—are in a shambles.

But as Logan is learning, you can’t always get what you want… at least not right away. To take his mind off the mess, he takes a trip, but even the beautiful Italian, um, scenery can’t keep his thoughts from his erstwhile editor for long. Logan just might have to admit there are some things you can’t run from.

Overall
A surprisingly delightful read, my initial reaction was not positive, as the narrator rubbed me the wrong way, but once I settled into his head and realized he was meant to do just that, his antics became more amusing than irritating. Although the love story left much to be desired, the focus of the story--the narrator's character growth--was well done and touching. Under the humor, the sarcasm, and the pseudo-blasé attitude, the author, through the narrator, gives the reader a look deep inside himself and makes the reader question their own place in life.

Stories by authors about authors are always a dangerous ground, but the voice and sometimes ridiculous attitude of the narrator lets this story come to a head without taking itself too seriously and ruining everything. And while the story has a first person, it's-all-about-me voice, it's ridiculous manner keeps it from being a whiny exposition.

Strengths
The narrator is slightly annoying, kind of funny, and pretty much an average guy trying to do his job. I was fed up with him by the second chapter, and begrudgingly siding with him by the tenth. He's an anti-hero, lacking most the positive attributes of a hero, but doesn't prove as irritating as other literary anti-heroes (I'm not naming any names, Holden). Some may find him too annoying to continue, but once I progressed a good chunk of the way through the book and his world began to quake on its feet, my interest took hold.

While my own position as a hopeful author may taint my review, I found the points made in the story and the lessons learned to be meaningful thoughts to ponder, and I think they'd apply outside the writing profession as well.

The humor used here may not appeal to everyone--it's not generally my thing--but it lends a specific voice that makes the narrative work. If the style had been done differently, it probably would have fallen flat, and while it's not laugh-aloud funny, it is a vital strength that made this piece come together.

Weaknesses
This story is a collection of odd characters, and this made it difficult to really empathize with any of them, although generally in this style of story, that is perfectly acceptable.

Once again, the humor and story isn't going to be to everyone's taste, but I think it's a strong enough, and meaningful enough, story to give it a chance.

Requested this book for review.
Posted by Unknown at 07:22