Bonds of Earth by GN Chevalier 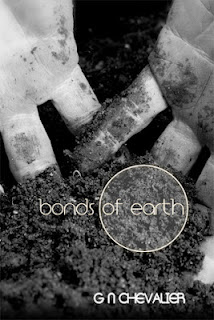 Bonds of Earth by GN Chevalier

Length: 240 pages
Blurb
In 1918, Michael McCready returned from the war with one goal: to lose himself in the pursuit of pleasure. Once a promising young medical student, Michael buried his dreams alongside the broken bodies of the men he could not save. After fleeing New York to preserve the one relationship he still values, he takes a position as a gardener on a country estate, but he soon discovers that the house hides secrets and sorrows of its own. While Michael nurses the estate’s neglected gardens, his reclusive employer dredges up reminders of the past Michael is desperate to forget.

John Seward’s body was broken by the war, along with his will to recover until a family crisis convinces him to pursue treatment. As John’s health and outlook improve under Michael’s care, animosity yields to understanding. He and John find their battle of wills turning into something stronger, but fear may keep them from finding hope and healing in each other.

Overall
I love this book. I struggled to write the review for this because every time I went to, my words didn't seem good enough. Even now I'm just rambling on about how much I liked it. I'm not a big historical fiction reader, but much like Tamara Allen, this author has a style I love and picked a topic I enjoy. I will definitely be looking out for more by Chevalier.

While this is a romance, the romantic elements are almost secondary to several other focal factors: healing war wounds (physical and emotional), the advancement of medicine and psychiatry, and overcoming the self. This well-written tale may not have provoked tears, but it left me breathless in its beauty.

Strengths
The writing in some ways is simple, describing gardening, massage, and life, but it's also moving and powerful, bringing alive everything on the page. The majority of the story is a slow progression, so the strength of the writing and the author's storytelling skills are vital to holding everything together and keeping the reader's attention.

Everything else, too? The story is basic, just telling the life of a man and by doing so shares the lives of all those around him. He doesn't make miracles happen or leave a huge imprint on society, but through small things he does make huge changes in the lives of those around him. The characters are beautifully real, toughened by the war, broken by the war, rough and tumble but kind and thoughtful.

This was a book that moved me, not to cry or to ache, but to hope. To see what happiness is in life, to hope that the world is full of people like are in the story, to hope that those who suffer can find the happiness the main characters found. It filled me with a quiet joy; I felt almost serene at the end.

Weaknesses
There isn't a weakness that I can find in this book, although there are some elements that I enjoyed that other readers may not.

This is a slowly progressing story, which is what it needs to be, but some may not enjoy the careful build.

There are flashbacks written in third person present tense, which may throw some people off.

Also, there was a moment when I think the one character draws a sunset in pencil. I may have misread the lines, but he brought a sketchpad and pencil, and yet it later says how he painted the sunset. But I may be misremembering, and it's really nit-picky.

Requested this book for review.
Posted by Unknown at 20:11