Inherit the Sky by Ariel Tachna 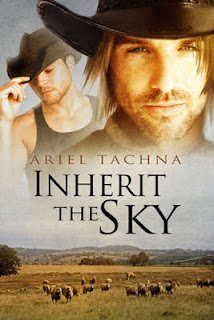 Length: 206 pages
Blurb
Caine Neiheisel is stuck in a dead-end job at the end of a dead-end relationship when the chance of a lifetime falls in his lap. His mother inherits her uncle’s sheep station in New South Wales, Australia, and Caine sees it as the opportunity to start over, out on the range where his stutter won’t hold him back and his willingness to work will surely make up for his lack of knowledge.

Unfortunately, Macklin Armstrong, the foreman of Lang Downs who should be Caine’s biggest ally, alternates between being cool and downright dismissive, and the other hands are more amused by Caine’s American accent than they are moved by his plight… until they find out he’s gay and their amusement turns to scorn. It will take all of Caine’s determination—and an act of cruel sabotage by a hostile neighbor—to bring the men of Lang Downs together and give Caine and Macklin a chance at love.

Overall
This is a light romance that starts off almost unbearably slow, but picks up toward the end. It suffers from a bit of a fascination with the details about sheep farm life and several scenes could have been cut because they did nothing to further the story, but overall it was a fine read. I wasn't particularly invested in the characters or the romance, and my favorite characters were side characters, but it wasn't grueling to read either. Probably worth picking up for readers who like Tachna's other works, really enjoy farming stories, or love Andrew Grey's Farm series.

Strengths
There were scenes I really enjoyed, such as the flood, and when Caine puts his man-boots on and stands up for himself. Those moments brought out the essence of the story and occurred more often in the latter half of the book (appropriately).

Several characters (the young boy and the cook) are fun, more friendly, and add a nice layer to the types of characters. They weren't enough to make the story really shine, but were an element I enjoyed.
The sheep farming and information about Australia all felt thoroughly researched and gave me a sense that I could know what to expect if I ever walked onto a sheep farm. I appreciate the hard work that obviously went into it.

Weaknesses
This story has an epilogue that isn't an epilogue but is actually the final chapter. It's not really a point against it, but I know some people get really annoyed with it.

One of the characters went from good to evil and back again way too quickly for my taste. Obviously finding something out about someone (aka, the gay), would cause serious reactions in some people, but for me the changes were too abrupt in every direction.

The writing wasn't bad, but in combination with the pacing of the story, left me un-enthused. It was a story I enjoyed while reading, and I was curious about how things would turn out, but it didn't move or inspire me.

Requested this book for review.
Posted by Unknown at 20:32