Review: What Becomes You by Aaron Raz Link and Hilda Raz 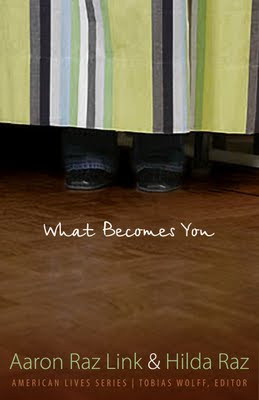 What Becomes You by Aaron Raz Link and Hilda Raz
Stars: 3/5

Overall
While this book has an interesting concept, the writing and length kept me from really enjoying it. Some parts felt overly repetitious and went on too long, while other parts felt like they were barely explained. The language and grammar seems more poetic than prose, which sometimes makes it difficult to understand what is being said--or what is trying to be said. However, this is balanced out by some sections that are beautifully written (when the style clicks with what's being said) and express important and powerful messages. I wish I could read an abridged version.

Strengths
I think the thing that saved this book from being a terrible read was that the sections that I enjoyed, I really loved. I loved the ideas Aaron shares and his story. I wanted to know more, see more, learn more. He had sections that seemed almost enlightened in both their concepts and their writing. I loved those sections. Sadly, they were not all that often.

Topic. Obviously people don't pick this book up (most likely) unless they have an interest in transsexuals or concepts of gender and sexuality. It's why I picked it up and those elements were completely satisfied by the end. They book also does an excellent job of looking at perception: how we perceive ourselves, how others perceive us and how that perception can change.

Weaknesses
Lack of linear story telling. While I can respect that this isn't an autobiography in the traditional sense, I found the amount of skipping around difficult to follow. Aaron's story is especially bad at this as his early adult life (mainly his 20s) are shown in such brief and random glimpses that it's hard to tell what's happening in his life. While obviously the events aren't meant to be the central focus of the book, it made it hard for me to understand his emotions and his mental standing when he turned 30.

Hilda's section. While Hilda's section had some interesting parts, for the majority I wasn't interested. Perhaps it's because my own perspective aligns more with Aaron's, but I think it's more a matter of not feeling particularly compassionate toward her story and her telling of it. While she stresses that Aaron wanted her to write about herself, I still felt like her story was more selfish in its attempt to share the same story Aaron told from the opposite side.

Writing. The writing wasn't necessarily bad, but it had a certain poetic style that was sometimes difficult to understand. It felt like a prose poem rather than straight prose, which didn't lend itself to expressing the story these two individuals were trying to tell.
Posted by Unknown at 18:21