If I Must by Amy Lane 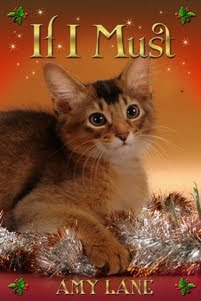 Overall
First we are greeted with an adorable kitten with holiday decorations on the cover. Then we meet Ian and Joel, polar opposites who are both endearing, sweet, and love. Mix this all together with Lane's strong writing and we have a great holiday story, especially if you're looking for something that is almost sappily sweet.

Strengths
Use of flashbacks. The linear story line interrupted with flashbacks worked well here as we see the development of Ian and Joel's relationship as given to us by Joel via his sister. It allowed Lane to cover 5 months of time in a limited amount of space by just highlighting the important parts.

Characters. While it may be hard to understand what Joel sees in Ian, they are both great characters. Joel is sweet as pecan pie, organized and helpful; Ian is disorganized, honest, genius, and giving. I wanted nothing more than for them to find their happy ever after and they truly deserve each other (in the good way). Also, Joel is sort of the perfect man (at least in this circumstance).

Ian. I know I already said I loved the characters, and I do love Joel as well, but Ian just really touched me. Maybe it's because I'm socially inept too, but I could understand him and relate (to an extent. I'm incredibly organized!). His inability to pick up flirting cues, not realizing certain clothing is inappropriate for certain times. He and Joel also have an interesting dynamic since Ian has a sort of power (he is the money maker) while Joel obviously has a power as well (he keeps Ian fed and happy).

Weaknesses
Talking Mexican. I was a little disconcerted by the use of "talking Mexican" and the actual words used. While I can logically understand that Lane was differentiating between Spanish, English and a second type of English that's spoken at home, I felt it portrayed the language as being a little "uneducated" and kind of stereotyped. It also took me a while to get a hang of what was happening. This language use didn't upset me, especially once it was explained in text, but some people may take more (or less) exception to it.

While not quite Insta-Love, the relationship does move rather quickly over a short period of time of both them being together and them knowing each other. It was handled well, but people who have major issues with thinks that taste of insta-love may hesitate to read this.
Posted by Unknown at 23:30

I liked this one, and it didn't offend my anti-insta-love meter. :)

I could definitely relate to Ian, too. I've usually ended up dating really obnoxious guys, because hello! Flirting cues I couldn't miss! *sigh*