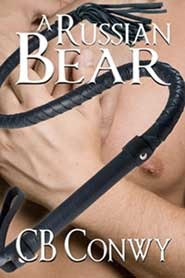 Overall
While I overall enjoyed the novel, I felt it had the potential to be so much better. The writing is okay, and while I don't mind the long exploration of Mischa and Tom's relationship, the end is rushed; I wanted more and I wanted it explored. It almost felt as if the relationship was written, then someone commented that there wasn't much plot, so an action and resolution were tacked on. I enjoyed the relationship, I enjoyed the action and resolution; I wanted them more balanced. However, that said, this is still a good book, especially if you want an exploration of BDSM (pain-centered) and a very interesting Dom/Sub relationship.

Strengths
Characters. Tom and Mischa were both interesting, deep characters. I enjoyed exploring their relationship as they found what they needed in each other and if they wanted a relationship and how that relationship would work. The very few side characters were also good, although I think having more people would helped develop some of the weaker points.

Plot. I can't say much because it's spoiler, but the attack on Tom created an interesting situation between the characters, as well as introducing an additional character. Conwy handled the events well and gave a refreshing angle to an often-used trope.

Weaknesses
Unbalanced plot. The two parts of the story (relationship development and after the attack) are both good, but the latter seemed tagged on and wasn't developed to its fullest potential. The slow progression of their relationship matched their personalities, especially Mischa, but knowing that an attack was coming (since it's in the teaser blurb), made the book drag a little. Heading into the final 10%, I wasn't sure how the author was going to be able to fit everything in--and honestly, Conwy didn't. The story was cramped and involved large time jumps only highlighting the big changes.

Writing. While not terrible, the writing was a little stilted, lacking sentence length/structure variation and depending too heavily on using names or other signifiers when pronouns would have functioned similarly without confusion. The general public may not have any issue with this, but people who are particular about writing style should be forewarned, although I don't think it should necessarily keep you from reading it.
Posted by Unknown at 17:59