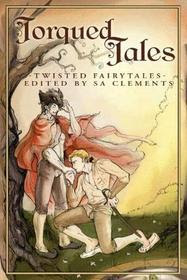 Overall
I think one of the best parts of this was playing "spot the fairy tale." It's hard to rank anthologies, but this one was pretty strong overall and there were few, if any, stories that were painful. If you like fairy tales, this is definitely something you should pick up, as it covers the gamut. While none of the stories were exceptionally weak, none were mind-blowing either. Fun, this is great for reading before bed...just like when you were a kid :)

The Emperor’s New Clothes by CB Potts
This re-telling stays true to the original (or at least the original I grew up with). Okay, there was no sex in the one I read as a child, but hey. In fact, this mostly just feels like the adult version of the same story, with all the naughty bits added back in. That being said, the story could feel boring (since we know what's going to happen), but Potts gives us a wonderfully fun narrator who gives life to the rehashing and makes the same story hum instead of hum-drum. Also, highly amused at the "twins who didn't share any parents."

Tiger, Tiger by Laney Cairo
This was a delightfully little story that was by no means a surprise, but still fun. It's not really a play on any fairy tale (as far as I can tell), but it does work of the almost mythical existence of the thylacine and the title plays off William Blake's "Tyger, Tyger". It was well written and cute, with a hot scene or two and was overall enjoyable.

The Bat Prince by Elisa Viperas
This was an interesting take on "The Princess and the Frog" and it's interesting the changes that were made. The golden ball is a weather device (vanity vs. something productive) which goes up instead of down (I'm sure there's symbolism there), and the frog becomes a bat (no kissing required). What I'm enjoying about the stories is that while they pretty much stick to the original formula, they change little things and make an enjoyable story. Maybe I'll read these to my niece and nephews...um, revised, of course.

The Master Cat by Kiernan Kelly
I bet you didn't know cats could turn into hunky men, did you? This was another delightful retelling of a favorite tale. My knowledge about Puss in Boots is a bit rusty, but the story seems to keep rather true to the original--not that it matters. The story stands strong on it's own. Good, not fantastic, but definitely worth a read, with an ending line that is the perfect amount of cheese to be funny! I was surprised to find there is a bit of spanking/whipping in it, as Puss really is the Master in the relationship.

Lie to Me by BA Tortuga
Cute, but by no lengths my favorite. I think the most distracting to me was the use of the name "Loki" which seems to hint at playful mischief or just outright trouble, but perhaps I'm missing a more subtle use or the guy's name is just Loki. While this story didn't grab me, I did enjoy reading it although (and this was touched upon in the story) I couldn't help think of splinters the whole time!

For Kingdom's Sake by Jane Davitt
I was surprised by this story! At the start I was expecting certain people to be certain things, but was pleasantly surprised when the author took me in a different direction. There was only one moment where I felt the character acted out of type, and that was because Davitt set him up to be cold and ambivalent, then shows him being caring--which seems odd until we are shown that the cold front is only a facade, mostly, or else he can finally express he true emotions with this one person. Enjoyable and I was looking forward to finding out where we were being taken.

Hans und Georg by Mychael Black
Like warm, melted chocolate, this story fills your mouth with sugary sweetness. Not only is there play off the original story, but there are plenty of sensual chocolate references that are delicious. The romantic dynamic between the pair is wonderful, and I appreciated the use of German (even though I didn't understand it) when they would whisper sweet nothings (or scream in pleasure...) to each other. Definitely worth taking a dip, though you may want some Hershey's syrup on hand...

Trip Trap by Syd McGinley
Here we meet the three Buff boys who come across a bear ... so to speak! In a unique retelling of the Three Billy Goats Gruff, the youngest of the three brothers is known as Baby to his siblings, and they treat him just like that. He's a good, handsome man, despite what his brothers' say, and he's just beginning to enjoy his adventures in the woods when the three siblings come upon a bridge and a no trespassing sign. You'll have to read to find out what happens, but lovers of light BDSM will find a good time in this surprisingly sweet tale.

Godwyn of Coventry by Renee Manley
As I wasn't familiar with Lady Godiva's story (which I didn't realize was the play on words until I googled it later), much of the story was new for me. I was mildly curious to watch where the story headed, but once I got there, I didn't feel particularly interested. Godwyn and the potter (and his family) are the only two good people in the story (out of four main men) and while everything turns out OK in the end, I felt the earl deserved a bit more punishment for his mean ways.

The Three Little Twinks by Vic Winter
A playful take on the Three Little Pigs, this is only meant to be a sexy and eventually sweet story; nothing too heavy. It has some cute play on words and is a quick read. It was good for what it was and it was fun.

Jack and the Big Ole Pinto Bean by Julia Talbot
Replace Jack's mother with Jack's boyfriend and the story is almost identical to the standard story, which could be because Jack's story doesn't have romance in it. Because this felt so close to the original, I didn't feel like there was much new or fresh brought to the reader. Kind of disappointing, although the reading was perfectly acceptable.

Outfoxed by Angelia Sparrow
This was an interesting story that took a different angle from normal fairy tales, which usually take the perspective of the hero (aka, the prince). This one tells the story from the fox who guides the hero along the way. It was a sweet story as he two fell in love in dreams and became friends in life. It either alluded to or retold a story I wasn't extremely familiar with, although several of the elements I was aware was making specific references.

Little Cowboy Riding Rig by Sean Michael
Very much a PWP with references to Little Red Riding Hood. While not artistic, it was a fun little piece with an amusing narrative voice. The characters are from a larger work, though they are obviously working outside the normal environment here, and I doubt it's canon for their story (I'm not familiar with the original). A fun little piece.

The Nature of the Beast by Kara Larson
An Australian retelling of Beauty and the Beast. I enjoyed this story, although for remakes of this tale, I think Lane's Truth in the Dark does a longer and better job, but it's hard to beat that. This is a fine piece of writing, although it was heavy in Australian terms/slang/language, which works for the characters, but made my job as reader slightly more difficult (although I'm not sure how this could have been fixed). I liked how things translated from roses to gardening and the parameters of the curse. Nice, well-done story.

Happy Whenever After by Dallas Coleman
This was a surprisingly delightful (if not crass) tale. The narrative voice is certainly unique! Told in a first person almost stream of conscious as our narrator shares his life. For how rough and tumble the narrator is, it's a sweet story that had me smiling.

Locks of Love by Jordan Castillo Price
Sorry Repunzel, you've been replaced. If I wasn't already interested in reading JCP's longer series, this definitely would have peaked my interest. We are given a perfectly normal world where everyone has a power...it's just a matter of how good those powers are. The story was good, the characters were a blast and the narrator was a firm mix of "average joe" with a bit of tough guy and secretly a sweet heart (with a propensity toward psychology). Also, I approve of the double meaning title. Very good!

Roy Le Roy and the Bears of Hangman's Bluff by Cat Zheng
Oh Roy. This is quite the take on Goldilocks (and amusingly, the man in her part has red hair, not blond). While there is a certain amount of dubcon, it's not dirty or gross and overall feels rather consensual. If you like bears, you might just like this story.

A Fucked-Up Fairytale by Willa Okati
This is a funny story that is just fun overall with some interesting concepts. It has the whole "opposites attract" going for it, with a manly narrator and his sexy, fabulous boyfriend. I love how the narrator never panics, but takes his time and considers things (and googles them :)) before acting. Also, I never may think of the word "spindle" the same way, as the "spindle" in this story is quite different!
Posted by Unknown at 11:14