Weight of a Gun, an anthology 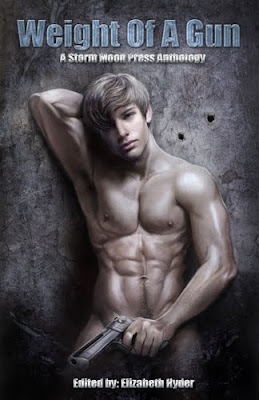 Length: 60,000 words
Blurb
Everyone knows that guns are dangerous; they have long been a subject surrounded by controversy. Combine them with sex and you have a subject that is virtually taboo, but smoking hot. This anthology explores the intersection of these two worlds, and the sensual possibilities they inspire.

In Bounty Hunter, William Hunt is hot on the trail of lover-turned-outlaw James Campbell. But when William finally catches up with James, bringing him to justice is the last thing on his mind. Changing the Guard introduces Tomi Vuorela, working security in a frozen off-world outpost. When Andile Harper intrudes on his seclusion, Tomi must determine if the interloper is a harmless workman or a dangerous terrorist.

Avery Belfour is The Machinist, kidnapped by a rival colony in need of his services. But the dark and deadly Harrow may have other plans for Avery first. In My Rifle Is Human, the more a Gunslinger like Fil sexually satisfies his shapeshifting partners, the Ordinances, the more likely they'll survive as weapons on the battlefield. When late-bloomer Morris becomes Fil's latest partner, however, it will take all Fil's patience and skill to seduce and inspire Morris in time for the next wave of attacks.

Tyler Maxwell from In the Pines, a former New York cop now working a desk job in Alaska, buys a gun as a present and begins to dream about the mysterious and beautiful Flynn. But Flynn is more than a dream, and Tyler must find the truth before he loses his mind. Finally, in Compromised Judgment, Rózsa Ignác is working to uncover a gunrunning operation supplying arms to his enemies. He's certain that Cistalan Konrád is involved, but his attraction to the other man puts himself and the entire investigation in danger.

Overall
I really love the cover of this anthology, which is dark and sexy without being obscene or cheesy. As for the stories, I've judged each of them below individually, but rated them as a whole anthology. Anthologies like this are tough, since they combine the talents of multiple authors and provide mixed content. This collection's works had good writing, plot, and story telling and interesting characters. It is a strong selection and definitely worth a read, especially if you like your sex a touch darker and with a gun. Even if guns aren't your thing, the stories hold their own.

Bounty Hunter by Cornelia Grey
Pretty much exactly what you expect when you hear the words "gun kink." With a Western theme, the thrill of the chase and a Colt, this story hits all the major points. Grey's artful descriptions paint a gritty world interspersed with touches of love and beauty. The tale unfolds in real time with heavy (but balanced) use of flashbacks to explain everything that happened. A strong, well-rounded story that digs deep emotionally and sexually as the truth unfolds for both the reader and the characters. I found the ending fitting intellectually but unsatisfying emotionally.

Changing the Guard by Peter Hansen
From the wild west we jump forward to a sci-fi future where planets have become super computers. In a short space, Hansen builds the world, dispersing information about it throughout the pages. Tomi is all alone on his post and when a stranger arrives saying he's supposed to work on the computer, Tomi doesn't buy it. Of course, a man all alone in the cold doesn't have much chance for companionship, and Andile is willing. What I enjoyed about this story is the plot builds to a point where the reader can't see the way out, and although some elements of the end left me questioning "Why did they..?" nothing threw me out of the story and ruined the ride. Interesting characters and a plot that leaves you with a good feeling.

The Machinist by Gryvon
This story has some interesting characters and we're thrown right into the middle of the action. However, my biggest complaint is that we're given so little in regards to the world, the history, and the characters. This feels like it belongs to a larger story that explains why the main character is in prison, what the creatures are that attack, and who the commander is. For those who like rough and kinky sex, this story satisfies with gun penetration, hair pulling, some spanking, and of course a cocked gun. Least this author pointed out that a slip of the finger could kill the lead man. The writing wasn't my favorite, but it was a strong piece nonetheless, and made me squirm in my seat.

My Rifle Is Human by Sumi
Considering the basis of the story is human weapons that get their powers from having sex, this was a surprisingly tender story with minimal kink and sex. After the heavy-duty stories that came before, it was a welcome change, although some readers may be disappointed by the lack of kink. While this story doesn't delve particularly deeply into the characters, the world, or much plot, there is just enough of each for a pleasant, warm read, which is what the story aims for. The weakest part of the story is the ending, which feels slightly tagged on and slightly rushed, but isn't disruptive enough to ruin the read, and I liked the resolution, which seemed fitting, if not a touch too perfect. Finally, the weakest part is the title, which considering the quality of the story, seems lame.

In the Pines by Lydia Nyx
Wow. This story was dark and sexy and the plot was interesting (and suspenseful) enough that I found myself skimming through the sex to find out what was going to happen. Although not all elements were a surprise, I felt the overall plot was well handled and the big reveal was hinted at enough to substantiate the ending. I was disturbed by the ending, but it was suited to the type of story being told. While most of the characters are pretty flat, this brings all the focus to the main character and everything that has happened and will happen to him. I both hated and really liked this story.

Compromised Judgment by Penny K Moss
I found the writing in this story to be a little stiff, but I'm not certain that it's the author's style or if it is to imitate the stiffness of the character and the characters' language. There is mystery, intrigue, spying, and dangerous attractions all tangling together to form what ended up being an enjoyable story. Although there is some frustration with only seeing a glimpse of what promises to be a larger world, for the most part the knowledge the reader needs is provided within the story. The characters didn't really speak to me, although the sexual tension and eventual release was good.

Received this book for review.
Be sure to check out my other reviews on my blog.
Posted by Unknown at 20:05