The Forester by Blaine D. Arden 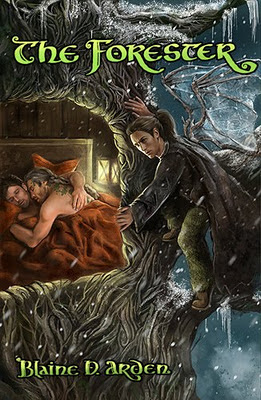 Length: 18,600 words
Blurb
Kelnaht, a cloud elf, is a truth seeker caught between love and faith. Worse, a murder committed ten days before Solstice reveals an illicit affair between two tree elves he desires more than he can admit: Kelnaht's former lover Ianys, who once betrayed him, and the shunned forester named Taruif, who is not allowed to talk to anyone but The Guide, their spiritual pathfinder. When Taruif turns out to be the only witness for the crime, Kelnaht has to keep Ianys from sacrificing himself and losing his daughter, while at the same time realising he'd gladly sacrifice himself to end Taruif's loneliness.

Overall
With enjoyable characters, a twisty romance plot, and murder case to move it all along, "The Forester" is an enjoyable, although regrettably short, read. Arden does a commendable job of building the world in a short amount of time and has a strong writing style. However, the story could have been strengthened by further development of the characters and their relationships and my enjoyment was restricted by my struggle to believe the emotional interactions.

I enjoyed the nugget we received, but would have loved to see more development. I feel my review below is harsher than I mean it to sound, as I did enjoy the story and the writing, but the two driving forces have weaker elements that detract from it's score.

Strengths
Arden is a strong story teller capable of painting a very nice picture of the world, the characters, and the scenes. The Kelnaht's conflicts involving his heart, go a long way to developing his character, as do his interactions with the Guide, who I find to be the most intriguing character of the story. The writing is such that I would definitely check out other works by this author.

While the world creation isn't too deep, the reader is provided all the necessary facts while not being given too much information. The perfect balance of provided and implied lets the reader supply with imagination anything that isn't told. In addition, a highly appropriate cover adds multiple details to the mind's eye.

Weaknesses
The murder plot felt somewhat secondary to the relationship plot, although it motivated several events. The mystery lacked suspense and as a result I didn't really care who'd-dun-it. It worked as a tool to bring The Forester into dealings with the Truth Seeker, but aside from that, it fell a little flat as there didn't seem to be an energy driving the investigation. I also wish that we had been given more about why the Forester was exiled before the end, although I am glad we were told eventually.

While I liked the romance and the struggle there, the story didn't give much space for understanding why the characters were drawn to each other and were willing to make the sacrifices they did for one another. I felt like it could have been expanded into a novella easily to build all the background that was needed to really understand any of the emotional draws between any of the characters but the ones who had once been together. That said, if you're able to suspend needing to know a reason, the story plays out very well.

Received this book for review.
Posted by Unknown at 19:01