Cop Out by KC Burn 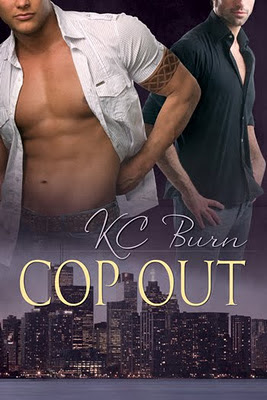 Length: 194 pages
Blurb
Detective Kurt O’Donnell is used to digging up other people’s secrets, but when he discovers his slain partner was married to another man, it shakes him. Determined to do the right thing, Kurt offers the mourning Davy his assistance. Helping Davy through his grief helps Kurt deal with the guilt that his partner didn’t trust him enough to tell him the truth, and somewhere along the way Davy stops being an obligation and becomes a friend, the closest friend Kurt has ever had.

His growing attraction to Davy complicates matters, leaving Kurt struggling to reevaluate his sexuality. Then a sensual encounter neither man is ready for confuses them further. To be with Davy, Kurt must face the prospect of coming out, but his job and his relationship with his Catholic family are on the line. Can he risk destroying his life for the uncertain possibility of a relationship with a newly widowed man?

Overall
Despite really enjoying this novel, its story, the writing, and the characters, I can't quite give it a full five stars because of some weak points, which I'll discuss later. This was a powerful, moving story that had me curled up on the couch, eagerly reading to see what happened next. The natural flow kept me from putting it down and the emotional draw kept me reading.

Although there are some weaker elements in this story, overall it excels in provoking the desired emotions and exploring Kurt's situation. The writing's strength made even the weaknesses forgivable as they just tended to be expected and foreseeable, not necessarily bad choices. The novel isn't action heavy, with only two real action-based events. For the most part this is a study of relationships and psychology, both for Kurt and Davy. For people who like that, this will be highly enjoyable. Even with the focus being the relationship, this didn't read slowly. Definitely recommend, as long as you're not looking for high action.

Strengths
The gradual development of the relationship between the two characters was extremely well built as they transition from being complete strangers to best friends and then something more. The subtle bits, like Kurt's casual acceptance that he likes touching Davy to comfort him because he was raised in a touchy household, work wonderfully to take their friendship and blur the lines without Kurt realizing what's happening--or at least it gives him an excuse for why it is.

Kurt's complete acceptance of Ben's (and Davy's) sexuality was refreshing. He didn't suffer from closet-gay or unknowing-gay syndrome and immediately hate gays because he hated himself. In fact, his realization, while in some parts suffered from the classic realization model, was not so much a struggle to accept being gay, but accepting the shift of self-perception from "I'm straight" to "I'm gay."

The use of Ben, who has one line and no actual screen time, was well used as a tool to bring Davy and Kurt together, but also as a comparison to both Kurt and for Simon. Although the contrast to Simon, the new partner, is apparent, the role Ben and Kurt both play in Davy's life is vital as their decisions affect him. For a character who barely appears, Ben played a huge role in the story.

There were plenty of tiny touches that I liked that went into this book, such as Kurt's family, Simon and Jen, Justin, and how the fall out and inevitable face-to-face encounter went. This story had the potentially to be mediocre, but was handled in such a way that even the cliche moments feel right in what is a heart-wrenching, feel-good love story.

Weaknesses
The weaknesses of the story are mostly superficial, such as one event at the end being rather predictable (although I still liked it). Kurt's reaction to their "sensual encounter" and the results of it seemed a little extreme if I thought about it too much, but overall I was so enthralled with what was happening that I didn't mind, but I am a sucker for suffering characters. Also, Kurt's reaction to coming to the realization that he's gay was a touch cliche, but such reactions are cliche because the hold a certain truth in them. It wasn't so overdone that it was boring and it wasn't dragged on too long, which was good.

Requested this book for review.
Posted by Unknown at 17:36