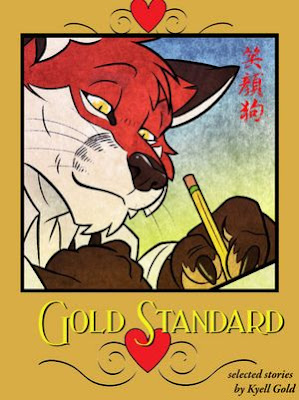 Length: 323 pages (estimated)
Blurb
Here are nine stories spanning Kyell Gold's career to date, including four Ursa Major Award-winning short stories and one story nominated for a WSFA Small Press Science Fiction award. Three of the stories originally appeared as stand-alone stories online and were later incorporated into the award-winning novels "Waterways" and "Out of Position."

This collection serves as an excellent introduction to the many worlds he has explored in the last decade, and includes his popular online stories "Aquifers" and "In Between." Also present is Kyell's first published story, "The Prisoner's Release," whose characters subsequently filled three novels and two short story anthologies.

Overall
Furries aren't really my thing (I feel like I've said that before), but I've heard good reviews about this author from other people who didn't really think they'd like a novel centered around furries. (Furries the anthropomorphic animals, not the humans who dress up like animals and have sex, just to clarify.) I was looking at Amazon's free reads and found this and decided to give it a shot.

The writing throughout these stories is excellent, which I think is necessary for success, especially for reaching readers who are less comfortable reading about this type of character. Gold not only has a mastery of language, but also does an excellent job of describing and developing characters and plot. Gold is comfortable and familiar with the created world and confidently strides through it, building things along the way to create visually stimulating masterpieces. Definitely worth looking in to, this collection introduces the reader to various series without forcing the purchase of said series in order to understand what is going on. If you're willing to dip your toes into the world of anthropomorphic animals, this is a great place to begin.

Aquifers
A good start to the anthology, we are eased into Gold's world and the sexuality that exists there. For most this will be a good indicator if you really can't stand the thought of two furries being in love and having sex. I fell in love with the characters, who are awkward sometimes, impossibly sweet, and pretty much standard high schoolers trying to find themselves and love. I love the themes of racism, class differences, and acceptance that are the secondary focus of the story outside the main character's exploration and self-acceptance. A good strong piece that is a perfect introduction. Although this story is continued into a novel, this one stands alone, satisfying the reader while creating interest in the rest of the tale.

In Between
This story has more sex and older characters as we're bumped up to college. Here a fox, playing as a female, seduces a tiger and gets him to thinking beyond his heterosexual desires. Perhaps a little too well, as he comes back, unable to get the fox out of his head. The sex scenes are well done, although the author doesn't let the reader forget that these are animals as things such as claws and tails are taken into consideration. A classic tale of a jock realizing he's not as straight as he thought and struggling to come to terms with it. I found the characters enjoyable and the fox is smart, witty, and a perfect foil to the tiger.

Secrets
A continuation of "In Between," this story works heavily with flashbacks, doing lots of time skips, which could be confusing, but it was well handled. Most of the events don't rely too heavily on when they take place, so the shifts aren't too discombobulating. Because I read this and the previous story back to back, they flowed easily into one another and I don't remember exactly what happened in each, but the main focus of this story is that the tiger has a secret and as the story progresses, different secrets are revealed until the big one at the end is displayed. I think the time jumps were handled well in this story, and it made me even more curious about where the rest of the tale goes.

Don't Blink
This story was weaker than the previous ones. Revolving around a young superhero trying to prove himself both to the police and the league of superheroes, Blink Coyote wants a nemesis and gets what he wants when his girlfriend gets captured. There were several things I enjoyed in this, including many of the side characters and Blink's general desire to be noticed. Other elements and turn of events fell flat and while they didn't necessarily feel forced, they didn't feel like a natural progression. More like they came from far left field. Still it was an overall enjoyable story for what it was.

Jacks to Open
Initially this story's focus is on gambling, which doesn't really interest me, but as everything unfolds, it becomes apparent that there is more there than some playing cards. I really enjoyed this story and the path that it took, although I admittedly wanted more (and the author made no mention of this story continuing). The characters are shady without being bad, and they can hold their own with one another, which I'm noticing is a theme with this author's relationships. There is an underlying magical-ish world that the reader just gets to dip toes in, something I'd like to see more of, especially with these two characters--although I can see the advantage of the mystery being half the fun.

Race to the Moon
A cute little story that is styled much like a fable, following a coyote and raven, which has a touch of romance in it. This was enjoyable, and I couldn't guess where it was going completely (aside from obvious things that fables tend to have). A nicely done effort.

Drifting
This was a difficult story for me to read, since it involves a relationship where at least one member of the couple is unhappy with certain aspects. I think everything was well handled, whether I liked the content or not, and I definitely felt for all the different characters. My main niggle with this story was that we never find out what is going on with the other person in the pair, even after he admits that it is "my problem." I would have liked more development there, even if it wasn't the focus of the story.

How to Get Through the Day
This story was written as a bonus story as an addition to another work by the author. While this story stands alone fairly well, it's obvious that it's building off of something that already exists and there are a lot of questions that I want answers to, which if this is used to tease the reader into purchasing Gold's works, it's a good thing! I liked the insecurity of both characters, especially the main one, and the construct of the story as a list that the main character goes through as his to-do list of every day. There are plenty of teases in the story, but it's also self-satisfying and good in its own right.

The Prisoner's Release
A very different story from the others, this one is dark (most of it takes place in a prison cell) and inhabits a more historical and royal-infested world. I felt that the story overall was good, although some parts at the end confused me since it seemed to conflict with what the main character had said at the beginning (though he could have been lying then, as is likely, but I was still confused about who was being loyal to whom, etc). I liked the two main characters and their dynamic, bouncing between wary trust and tentative emotions. Although not my favorite, it was still enjoyable.
Posted by Unknown at 10:12