Men Under the Mistletoe, an anthology 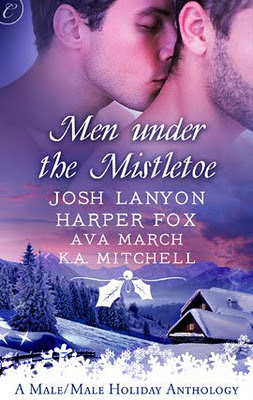 Men Under the Mistletoe, an anthology
Stars: 4/5

Length: 116,000 words
Blurb
Baby it's Cold Outside
A man receives the gift of pleasure at the hands of two expert lovers. Boyhood sweethearts get a second chance at romance. Two very proper gentlemen indulge their forbidden desires. And a Christmas tree farmer has an epiphany. It may be cold outside but these four holiday novellas will warm you up.

Overall
An excellent collection of four Christmas novellas, these stories capture the spirit of the holidays and warm you to your toes better than a cup of spiked cocoa. A nice mix of hot sex, warm loving, and cold shoulders, you may think you know how some of these end, but others will surprise you. Check these out for Christmas, or for any time you want to curl up with some holiday cheer.

My True Love Gave to Me by Ava March
Stars: 4/5
This is my first read of anything by March, so I don't know if somewhat-flowery language is the norm, but it definitely worked in this piece. I rarely read historicals, but I'm always impressed when I do and I can FEEL how much research and knowledge went into them. March obviously knows a thing or two about the time period and uses what I assume is all the appropriate language, although sometimes it may be a bit too much for those not familiar with the terms. The story starts off sweet, but the blurb tells us that it's not going to continue, which makes their secret kisses and Alexander's hopefulness all the more difficult to bear when the fallout happens.

Because the novella's blurb (not listed above) gives away the break up, I found the beginning a bit slow, since I knew what was going to happen. However, it was worth reading through, because it developed both characters as they were as youths--hopeful and adventurous yet kind, and sweet and self-sacrificing, always wanting to do the right thing. Seeing the change between the years and how the time altered them, made the changes more significant and the struggle for Thomas to prove himself to Alexander all the more daunting. While moments of the ending were a touch saccharine for my liking, it was a proper reward for all their emotional struggles.

Winter Knights by Harper Fox
Stars: 5/5
Twining together reality and the supernatural, Arthurian legend and love, this novella brings to life the spirit of the past, the present, and the future. Initially, Gavin comes across as the hero while Piers is the faulted Catholic blinded by his hateful religion. But what I loved about the story is that Gavin isn't as right as the reader is led to believe in the beginning. He has faults, some which have majorly disrupted his relationship with Piers, not that the other man doesn't have some faults as well. There is so much going on in this story, from the various Arthurian references, the presence of the rescue workers, Gavin and Piers' relationship, and all the other factors that push the events along.

I don't want to say too much, for fear of giving away the wonderful little twists that this story provides, but I will say this was a wonderful tale and it's levels and depth were brilliantly handled.

Lone Star by Josh Lanyon
Stars: 3.5/5
While I enjoyed the characters and the resolution of this novella, overall the story didn't really grab me. In addition, the reindeer ploy was creative but I felt like its presence needed more explanation or attention. It feels like a tool to get the two men together--and it's fine if that's what it is there for, but as the reader, I shouldn't be so keenly aware of its place as a tool. While it's a minor issue, it reappears often enough to make the narrator wonder if he's crazy--and the lack of resolution leaves the reader wondering the same thing.

What I liked about the story is mainly the resolution, which felt right for the situation and the characters, who seem to be as opposite as possible. If it weren't for how this story ended, I probably would have scored this lower, because while the characters entertained me, they didn't feel exciting and new, although they played out their roles with some fresh touches. In addition, the warmth of Wet's family both among each other and to Mitch was a perfect, heart-warming touch to this holiday story.

The Christmas Proposition by KA Mitchell
Stars: 4.5/5
This story resonated a classic holiday feel although it isn't resolved by the leading man Mel learning the meaning of Christmas. Instead he learns the meaning of trust and love and taking chances and relying on others. It sounds rather trite and silly when I say it, but Mitchell does an excellent job bringing everything around.

In some ways the resolution is too easy, but in reality, the struggles Mel sees are not actually there (or no longer require his exacting attention). While this story definitely has a rich man throwing money around, I didn't feel like it suffered from the "rich man solves all problems for poor man" syndrome. A happy story with minimal angst scattered throughout as Mel tries not to be angsty and instead focuses on what he has now, since he has no hope of it in the future.

Finally, I think one of my favorite elements of this story is Bryce asking what childhood trauma caused Mel to be so mistrusting, and Mel says there is none. I just love that someone pointed out (bluntly) that just because we're screwed up now, doesn't mean there was one thing that screwed us up.

Requested this book for review.
Posted by Unknown at 18:58