The Saturnalia Effect by Heidi Belleau and Violetta Vane 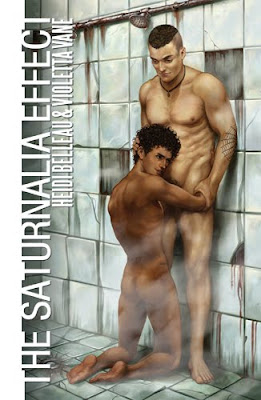 The Saturnalia Effect by Heidi Belleau and Violetta Vane
Stars: 4/5

Length: 23,000 words
Blurb
Troy Khoury is serving a life sentence in Westgate prison for a robbery gone wrong. He just wants to keep his head down and do his time, but he runs afoul of an old-timer named Franchetti. Franchetti offers Troy a simple choice: kill fellow inmate Daniel Amato by Christmas in exchange for protection, or be tortured and raped to death by Franchetti's heavy, Pliers. Troy's no killer, though, and Daniel is as gentle and calm as can be. But a prison is a small place, and time is running out. Troy must decide how much he's willing to sacrifice before the choice is taken from him.

Overall
The dark halls of prison are no place to celebrate Christmas, especially when you're a pretty boy without much desire to hurt anyone. This is the case for Troy, who is stuck between a rock and a hard place. While "The Saturnalia Effect" is a dark, fairly heavy story, there is still a struggle to keep hope and love in one's life, a theme that weaves throughout and keeps the novella from becoming too bleak, especially for it's holiday theme. In multiple instances, I was emotionally moved and nearly rejoiced at the end. Although the story won't fit everyone's tastes, it's definitely worth checking out.

Strengths
I was on the edge of my seat as the events unfolded, as Troy debates killing Amato, tries to get out of it, and faces the many consequences of his actions. A dark story, it illustrates the worst sort of prison where the strong rule supreme and the weak are either taken under wing or abused. While I cannot vouch for the veracity of the environment, in the world the authors built, it felt real and worked to supply the events that make this story so gripping. The rawness and darkness are what make the tale so enthralling and beautiful in its bleakness.

While I was never in love with any of the characters, I certainly felt empathy for Troy. In addition, there are a wide variety of character types that Troy has to face, and because this takes place in a prison, all the main characters are inmates, and thus not generally "good guys." But in line with the movie Shawshank Redemption, not all bad guys are that bad and not all good guys (aka, the guards) are that good. I felt, considering the space restriction, that a good amount of depth was given to the significant characters in addition to the two leads.

Weaknesses
While I enjoyed the ending, it was a very surprising turn of events, even with hints littered through the story. The ending didn't ruin the novella, but it did catch me off guard.

Additionally, certain elements of the prison and prison life felt a touch cliche and stereotyped, but because it was built so well, I didn't mind the potential fallacy.

Received this book for review.
Posted by Unknown at 19:32