The Druid Stone by Heidi Belleau and Violetta Vane 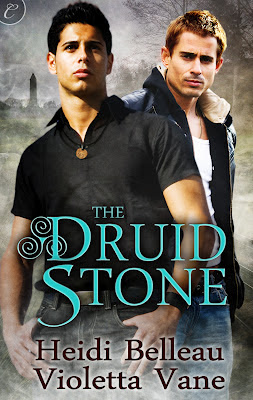 The Druid Stone by Heidi Belleau and Violetta Vane
Stars: 5/5

Length: 117,000 words
Blurb
Sean never asked to be an O'Hara, and he didn't ask to be cursed by one either.

After inheriting a hexed druid stone from his great-grandfather, Sean starts reliving another man's torture and death...every single night. And only one person can help.

Cormac Kelly runs a paranormal investigation business and doesn't have time to deal with misinformed tourists like Sean. But Sean has real magic in his pocket, and even though Cormac is a descendant of legendary druids, he soon finds himself out of his depth...and not because Sean's the first man he's felt anything for in a long time.

The pair develop an unexpected and intensely sexual bond, but are threatened at every turn when Sean's case attracts the unwelcome attention of the mad sidhe lords of ancient Ireland. When Sean and Cormac are thrust backward in time to Ireland's violent history—and their own dark pasts—they must work together to escape the curse and save their fragile relationship.

Overall
Another breathtaking exploration of reality, love, and the supernatural by Vane and Belleau. In some ways this story is very similar to Hawaiian Gothic, but it differs so dramatically that the similarities aren't even worth mention, although fans of HG will just as surely love The Druid Stone. Be sure to grab on to your hats, though, because just when you think the ride is about to end...it's really just beginning.

Review
Holy Plot Batman! This story makes your head run in circles trying to guess what's going to happen next—give up, you won't! It's an amazing adventure that once again crosses the boundaries between the mundane world and the supernatural, as Sean and Cormac try to resolve Sean's recurring dreams—a more complex problem than either of them suspects in the beginning. Along the way they make friends, make enemies, and struggle to handle the greed of supernatural beings. The plot is fantastic and leaves no stone unturned—and no thread left dangling.

There is a fairly large (but not overwhelming) and varied cast in both worlds. Cormac, who is a bit of a stiff board sometimes, is balanced out by his super-welcoming family, while Sean, who is incredibly functional considering all he's been through, is contrasted by his almost completely absent family. The men themselves work well together in their struggle and in their stubbornness. And, while this is definitely a romance, it almost takes second seat to the adventure, although the two parts seamlessly entwine.

There are vivid descriptions in this novel, letting the reader experience what the narrator is, while enhancing the narration and bringing the environment to life. But these descriptions also didn't overwhelm the story or interrupt the flow of action. They were well placed and easy to skim with a quick read (if you're that type of reader). Gorgeous.

I think my biggest 'issue' with the novel was the ending, which felt almost anti-climatic after the drama in the previous 100,000 words. I found the conclusion completely satisfying, but after riding the adrenaline and emotional high, it felt so very mundane. That being said, it was perfectly handled and I really loved how things were resolved.

This was one of those books where I loved every moment and already want to go back to re-read.

Requested this book for review.
Posted by Unknown at 19:48