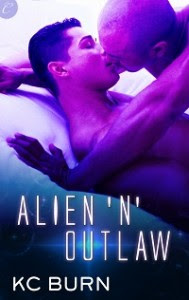 Length: 44,000 words
Blurb
R'kos, son of the Ankylos Emperor, is expected to settle down. But he's much more attracted to human males than to his own species. Eager to explore his forbidden longings, he steals a ship and heads to Elora Ki to see if he can find the right human guy.

Darien robs the corrupt to give to those in need, but now he needs a ride off Elora Ki, stat. Pursued by drug lords, he accepts help from the amorous stranger who calls himself Ricky. As they fly together along Darien's route, their friendship quickly turns into passion.

But when Ricky is injured, Darien must contact the embassy to get his alien lover the medical care he needs. As Darien finds himself accused of kidnapping, and Ricky fears his family's disappointment, can the two protect their growing relationship? Or are their differences just too great?

Overall
Fans of Spice 'n' Solace will probably love this story, but I had similar issues with this one as I did with the first, which is odd, since I love Burn's Cop Out. An enjoyable story with an interesting world, steamy sex, and a unique alien specie, but nothing that really jumped out and impressed me. I wanted to enjoy this story more than I did, and though I felt disappointed in some elements, overall it was a pleasant read.

Review
The writing wasn't bad, but it didn't thrill me. It felt clunky, and while it didn't detract from the storytelling, it didn't really enhance it either. It could be personal preference, but it didn't do it for me.

I liked the challenges that get raised for the lead males, but the solutions felt too easy, much like Spice 'n' Solace. Misunderstandings and a simple conversation clear up problems that needed more attention. Maybe I just like my characters to struggle. A lot.

I love different takes on alien sex, and this series already caught my attention with the triads, but the anatomy differences were especially appreciated. They are cute and almost funny out of context (...though most sexual anatomy things are...), but in scene they are pretty darn sexy! Also, from the descriptions, I think I want to rub up on R'kos. He sounds divine.

There was a good balance of science fiction and romance, and while romance/erotica is obviously the driving force, the science doesn't get ignored, although hard-core sci-fi fans would probably find it lacking. There is brief exploration of other planets and cultures, which was there to help explore parts of the characters that we may not have seen otherwise. I enjoyed those elements of it.

Requested this book for review.
Posted by Unknown at 18:56