Men of Smithfield: Adam and Holden by LB Gregg 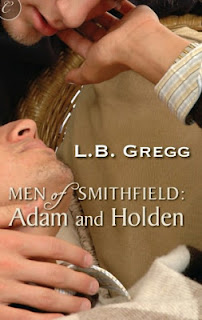 Men of Smithfield: Adam and Holden by LB Gregg
Stars: 3.75/5

Length: 55,000 words
Blurb
Holden Worthington's globetrotting days are over. Once the host of a popular adventure show, he hasn't ventured past his own front door in more than a year. Then the arrival of a sexy new gardener sparks something Holden hasn't felt in a very long time?an interest in the world outside his window.

Holden tries to resist the attraction. But painfully shy yet definitely interested Adam Morgan has Holden longing to conquer his debilitating anxiety and live again. After a grisly discovery on the grounds of the estate, the town of Smithfield turns a suspicious eye on the reclusive Holden?and the two men must trust in each other to bring the truth out in the open.

Overall
I started reading this before bed one night when I was restless, and although it didn't grab me as thoroughly as some books, I kept reading until 2:30 am, when I finally finished and was flat-out exhausted. It's enjoyable, with a background murder-mystery plot and some kooky romance. In the beginning, half the cast was going to drive me mad, but by the end I'd come to terms with most of them. I felt the story was leaning heavy toward having too much sex, but never crossed that line, although having read it all in one sitting may have given that impression. Aside from the off-kilter pacing and early annoyances, I found the story interesting. I didn't feel like I could quite give this a full 4-star rating (although it will be tagged as such), but it was better than 3.5. My second favorite of the three Men of Smithfield novels I've read.

Review
What really made this story work for me was Adam and Holden as two 'broken' characters who blend together nicely despite coming from 'opposite sides of the track.' Holden is agoraphobic after a traumatic experience left him shy of being photographed by the press, and Adam can't read people's facial expressions, body language, and verbal nuances. I really love how these two come together through their initial mutual attraction and develop as characters from there, helping each other 'heal' (or in Adam's case, have a safe place where he doesn't have to keep his defenses up). The opening up of their weaknesses helped them quickly develop an intimacy that otherwise would not have worked.

My biggest issue with this story is the rest of the cast (aside from Mrs. H and Tony, I suppose). Everyone just waltzes in and out of Holden's house as if it's nothing, avoids police questioning (even if they've nothing to hide), and is generally rude to Holden (except maybe Mitzie, who may have invited herself over, but seems rather nice). Obviously they do this because they've been permitted to do this, but it rubbed me wrong, although I understand this is a personal thing.

The murder mystery, while playing a main role in bringing all the characters together and moving all the pieces around, definitely feels secondary, which probably stems from the fact that it is secondary in Holden's mind. Holden isn't really too concerned with the dead body in his backyard (which sounds a little odd, but didn't bother me); he's too focused on his hot new gardener. This worked in some ways and didn't in others. I felt that when they were talking about the murder, I was impatient to get back to the romance, and when they were having sex, I wanted to get back to the plot. Perhaps that's just me.

Having said all of that, I still enjoyed this story. My love of Holden and Adam overpower any of my disdain for the side characters, and the resolutions made me like some of the characters more than I had in the beginning, which possibly left me with a better taste in my mouth. But really, Adam and Holden pull this story along and are worth sitting down to read.

Received this book for review.
Posted by Unknown at 19:00