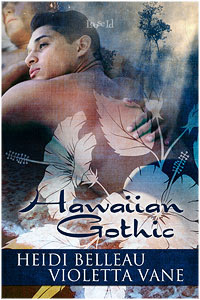 Length: 168 pages
Blurb
Ori and Kalani were childhood friends too afraid to be lovers. Now in their darkest hour—Ori disgraced and Kalani a wandering spirit—they’ll fight the world and death itself for a second chance.

Gregorio “Ori” Reyes thought there was nothing left for him in Hawaii. A former Army Ranger and promising MMA fighter, his dishonorable discharge turned him into the family disgrace, and his childhood best friend Kalani never could love him back--not the way Ori needed to be loved--even before Kalani’s doctors declared him to be in an unrecoverable coma. Ori’s return to Hawaii seems fated to be a depressing reminder of every chance he never took... until Kalani himself impossibly welcomes him home.

Kalani’s body is bedridden, but his spirit is free to roam, and it turns out it’s not just Ori who had unspoken yearnings. Kalani is eager to prove that he can still savor all the pleasures of this world. Together, they remember all those years of surfing, wrestling, touching and aching but too afraid to act; now, they cross that final barrier and struggle against each other in an entirely different way.

Passionately but tenuously reunited, the pair must solve the mystery of Kalani’s unlucky life, sorting through dark family history and even journeying to the Hawaiian ghostworld. And the greatest terror of their journey is that Ori might have to put Kalani to rest.

Overall
A wonderfully refreshing story that breaks out of the mold of standard romance while still keeping one foot in the contemporary. Although Hawaiian mythos is heavily used, the authors did an excellent job of providing the reader with the necessary information and keeping the reader comfortable--if not knowledgeable--with what is happening. A mix of a heart-breaking plot, an innovative setting and hobbies, and realistic characters makes this definitely worth a read, especially for fans of mythology.

Review
Before I rave about this story, the one "negative": a fair amount of sex. Most people probably won't be distracted (well, disheartened) by the several sex scenes, but I was--although in thinking back, I'm not sure there were actually that many sex scenes. It was just one of those instances where the story and plot were so good that I didn't want to be interrupted by delicious, tender, rough ghost sex! I wanted to know what was going to happen!

Sounds pretty ridiculous in retrospect. Anyway, I wanted The Story so badly that the necessity of the emotional and physical development of the main characters' relationship seemed almost secondary. Much of the development happens through flashbacks, providing an idea of where they come from and how they got to the point in their relationship that they are. Speaking of which, readers who get bothered by flashbacks that interrupt the flow of the story may have some issue here, but I found them interesting, even if I did want to get back to The Story (Noticing a theme?).

This is a great exploration of Hawaiian mythology as viewed by a somewhat outsider, which keeps the text from becoming too overloaded with references that the reader won't get but without treating the reader like an idiot, either. I wasn't sure what to expect from the blurb, but I was pleasantly surprised. It felt like a journey that Joseph Campbell would be happy to read as the hero faces great challenges and overcomes difficulty.

There was depth of character, a twisty plot, tough decisions, and ultimately a satisfying ending, which I won't say much about, since the ending isn't really determined until the final pages. The journey was fantastic, and I loved discovering everything along with the narrator. There are so many ways a story like this could go wrong, but it was masterfully crafted into a compelling tale of ghosts and monsters.

Received this book for review.
Posted by Unknown at 19:30