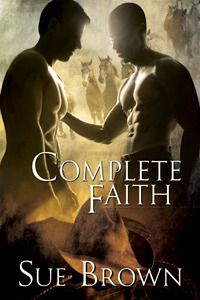 For Tommy Bradley, a hand working on the Lost Cow Ranch in rural Texas, admitting his sexuality is impossible, even if his bosses, Luke and Simon, are gay—Tommy has spent his entire life hiding the truth from his homophobic parents. Then Tommy meets pastor Noah Taylor in Luke’s father’s hospital room, and his difficult secret becomes that much harder to keep.

Noah is unlike any man of God—or any man—Tommy’s ever met. For one thing, his congregation is made up primarily of GLBT individuals and their families. For another, he isn’t afraid of the attraction he feels toward Tommy, and he makes his intentions very clear. But Noah won’t hide his sexuality or his love from the world, and he won’t start a relationship with Tommy while Tommy hides his, either. Faced with the choice of losing Noah or coming out to his parents, Tommy takes his first steps out of the closet.

But Tommy isn’t the only one facing challenges. Thanks to an outpouring of hatred from Pastor Jackson and a group of ranch owners, Noah must cope with the possible loss of his church and his livelihood.

Overall
A nice cowboy story that fits in all the standards while introducing some new elements. Lovers of cowboy/rancher tales will probably like this, but I think I may be a little exhausted on them, although having the pastor in the story did shake things up. I didn't read the first in the series, but aside from not having any character history, I didn't think that diminished my enjoyment.

Review
Although it's a perfectly enjoyable novel, I found everything to be generally rather forgettable. Gay ranchers in Texas having to deal with the backlash, a young kid coming out to his conservative parents, and the hard work of farm life Of course, this means that all these elements will get your crank if you look for cowboy stories. For me it felt mostly uninspired, although Noah's role (as a gay black pastor), added a nice flair.

There were some parts of the story (one in particular) that added a sense of adventure and excitement, but didn't really seem to further the plot any, except to--maybe--build character relationships. I wouldn't have minded this so much if it didn't feel like one of the major plot points mentioned in the blurb wasn't rushed at the end. I would have liked to have seen the confrontation between Noah and Jackson happen a little earlier so it could be fleshed out more, although if Brown is planning on having another book in the series (which I'm guessing she would), then she may expect the development to happen then.

I liked Noah and Tommy, but I also felt that so many things were happening around them that it detracted from them as the focus of the story. Also, there were a lot of sexual situations that were hinted at but never came to fruition or weren't really given any room to play. Again, these may be elements Brown plans on exploring in later books, but as the reader of this book, I felt shorted. Not that I felt it needed to be central in the story, but it's a pretty big thing and it just sort of gets pushed to the side.

Generally a well-written, enjoyable novel, but it had some weaknesses for me that hurt the enjoyability. Definitely not a bad read and it's worth picking up for all those cowboy lovers out there!

Requested this book for review.
Posted by Unknown at 20:30