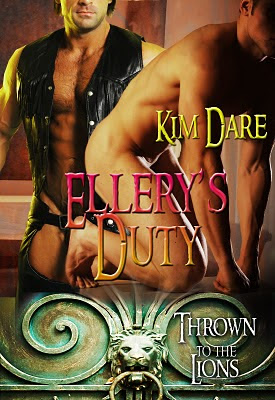 Blurb
As a well respected dominant, Ellery has been watching the subs from the local leather bars disappear into the lions’ den for far too long, and he’s not convinced that everything is as fine as they all claim it is. He’s determined to find out what really happens in there. If the only way he can do that is to volunteer to be thrown to the lions himself, so be it.

Kefir’s never worked out what the other lions find so interesting about the human sacrifices who visit their den, but this new man is unlike any other human he’s ever met, and Kefir’s captivated. Can the smallest lion in the pride claim a man like Ellery as his pet—is that even the way Kefir wants to think of his human mate?

Overall
After reading the the first book in this series, I immediately wanted to know more about Kefir, who was different from the other lions. And while I enjoyed his story, I was in no way enchanted. I think the problem is that I still love Kefir and I didn't really like Ellery much at all. He had his moments, normally when he was cuddling up with Kefir, but anytime he was dealing with anyone aside from Kefir, he came across as an arrogant prick.

Of course, if you like your dom to be an arrogant prick, then maybe you won't mind. After a second read through, he didn't come across so grating, but I still don't like him and how he handles Kefir, for the most part.

The weird thing is, I would re-read this story only because I really do like Kefir and I want him to have his happy ending, even if it's with Ellery.

Characters aside, there isn't too much to entice the reader, aside from shifters and BDSM, which may be enough for some people. The writing of this series continues to be middle of the road and the plots don't grab my attention. I almost feel (and I hope it's not just because of the mood I'm in) that the author has these characters and wants the story told, but just wants to get to the happy ending without having to trudge through all the work to really get the reader there. Don't get me wrong, I want the happy ending, but I also want the characters and the reader to have to earn it.
Posted by Unknown at 19:41