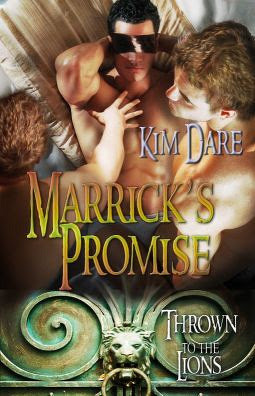 Blurb
Marrick thinks that being thrown to the lions will be the ultimate adrenaline rush, and he’s not disappointed. But his plan is to try everything life has to offer once. He has no intention of visiting the lions again.

Blaine and Luther don’t expect to give any of the human sacrifices they share another thought once they leave the den. This man’s different. They have no intention of letting this one go. The only question is, while they are willing to share Marrick with each other, are they willing to share each other with a human who could become as important to each of them as they are to each other?

In fact, the focus of the story mostly seems to be about sex until Marrick finally makes the long-hinted-at action and all three men struggle to come to an understanding with some outside help (or non-help, as sometimes the case seems to be). I enjoyed the story and the characters and overall the writing, but none of it was enough to grab me and make me want to stay and read more. Everything felt a little sex heavy, and I wasn't really inspired by the scenes. An OK novel.

Strengths
The characters were pretty interesting, with our masochist Marrick and two were-lions who have been told that humans are fragile. Blaine and Luther come across as being pretty dense, which I think is the author's intention, and really is the device that keeps the story moving forward as they just don't get it. I didn't fall in love with the characters, but I enjoyed while they were on stage, for what it was worth.

The final sex scene was the best and strongest scene in the book, I felt. It had emotion and depth that the rest of the book lacked, and it made me yearn to have the entire novel written with such thought and care. It was the first time I really felt what the characters felt and could understand what they all needed from one another--not just understand, but see it.

Weaknesses
I might be the only one who feels this way, but there was too much sex going on. Between sprints of plot were marathons of sex (okay, that may be a slight exaggeration). I'm fine with lots of sex, but I didn't really feel anything for these characters, and I couldn't buy why they wanted one another, aside from the mate thing. It wasn't until the final scene that they actually seemed to care for one another in a way that didn't involve a body part being shoved into another man's body part.

What is probably the crucial weakness for me is the lack of dynamic between characters. Supposedly Marrick is the mate to both Luther and Blaine and we see some of their yearning to always be near him and protect him, although some of it comes across as over-protective and domineering, but I never really got an impression from Marrick that he was in love with these two. While we were told that he was, and that he couldn't sleep without them, I didn't really go for it. Maybe we were limited by the length, but I wanted more development before they were swearing themselves to each other.
Posted by Unknown at 19:43