Signed and Sealed by B.A. Stretke 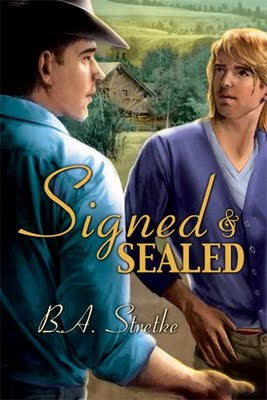 Blurb
William Drake’s living an ordinary life—he's got a job, a dog, and a house near Lake Superior—when a frantic call for help from his ne'er-do-well sister, Katrina, throws a big rancher-shaped kink in the works. Proving that no good deed goes unpunished, Will’s arrival at the Montana ranch belonging to Katrina's fiancé, Martin, is marked by a flat tire and unexpected help from a tall, dark, and handsome Good Samaritan who turns out to be Elijah Hunter, Martin's brother, and the most unsettling man Will has ever met.

Eli’s fury over Katrina’s misdeeds boils over onto Will, and he demands that Will remain on the ranch until the matter is resolved. While Will can take Katrina's place, Eli doesn’t make it easy, testing Will at every turn, but Will’s uncompromising morals exceed even Eli’s exacting standards. The attraction growing between them is further complicated by Eli’s ultimatum: he's still holding Katrina to the pre-nup she signed... unless Will agrees to marry Eli instead.

Overall
A lot of other reviewers have listed this book as "Harlequin" in nature, which really didn't mean much to me, since I've not read enough Harlequins to judge. However, it is something to keep in mind when reading this review, as some of my points may be applied to this Harlequin status.

To enjoy this book, the reader is going to have to take a ginormous leap of faith from the beginning, as the entire story is reliant on the notion that Will is practically held hostage at Eli's estate. While he's not being forced physically, Eli is holding financial reasons over his head. I found that, and the majority of the plot, to be ridiculous and horribly weak, which made a majority of the story unenjoyable. That, rolled together with the facts that Will can't trust Eli (who seems to change personalities every other scene) and Eli thinks Will is a gold digger like his sister, but they both have the hots for each other, makes for a frustrating story.

However, not all is lost. Once the story begins to dig deeper into Eli actually beginning to court Will and overcoming Will's distrust of him, the story picks up. If this is "your sort of story," I think it could be very interesting, but in general I was not impressed.

Strengths
Admittedly, I have a soft spot for antagonistic romances where hatred (with a touch of lust) blossoms into love. Once this novel got to that point where the initial logistics were put behind and Eli was beginning to court Will, everything was much more enjoyable. I realize that a large portion of the beginning was needed to develop their relationship to create the conflict, but more could have been done to focus on the strength of the story rather than the flimsy building blocks.

Weaknesses
The point of view was third person limited omniscient, jumping from character to character at the author's discretion. While it wasn't done poorly, I feel this novel could have improved if it was kept in a second person perspective, leaving the reader just as confused as Will was about Eli's motives and feelings. As it was, we know what's going through Eli's head, and it makes the majority of the struggles rather inane. While many books flip between the two characters and play off "misunderstanding" trope, this novel relied too heavily on Will's issues and distrust to work the conflict appropriately. While we can see Eli is a bit of a jerk, we never think he's as mean as Will does because we see inside Eli's head, although sometimes even that isn't enough to make sense of what's going on. I give the author credit for being consistently omniscient in writing, but don't feel it was very helpfully to the story telling.

The set up of the story was the most difficult for me, as I mentioned above. It seemed trite and unfeasible. I couldn't buy it and so I had a difficult time settling into where the author wanted me to go. Along those lines, I had a hard time buying that Will could just take off from work for a month, since we know he's not exactly rich. Plus, even though his dog is safe at a "friend's" house, I'd be a little pissed if I was asked to dog-sit for a weekend and it became a month! And he never calls to see how the dog is. Minor points, perhaps, but symptoms of the larger problem.

In addition, Eli seemed a bit unbalanced. To an extent, we are given the reasons behind this, but for the most part he just comes off as a little crazy/vengeful, which makes sense, as this is how Will is supposed to see him. However, some of the events that we see through Will's eyes are not compatible with how Eli behaves when we see events through Eli's eyes. Not until the end did Eli begin to have a consistent personality that seemed to fit with the person everyone describes throughout the story.

Requested this book for review.
Posted by Unknown at 21:23

Yeah, it sounds rather Harlequinesque and contrived to me. :) Pity that I'm pretty sure this would drive me nuts to read, because otherwise the "near Lake Superior" location where Will stars from might've sucked me in.

Very little (maybe one scene) takes place near Lake Superior. Yeah, have to say I don't know anyone who I'd recommend this to.