Hard as Teak by Margie Church 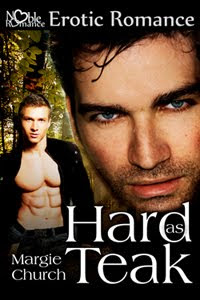 Blurb
Kevin Marks escapes to the north woods to reignite his passion for photography and women. But the only flame he seems able to spark is for his latest photography subject, Teak Hildalgo, and Kevin's never been in a man's arms before.

Teak, the raven-haired, photographer's dream come true, is hell bent on capturing Kevin's heart. He takes Kevin, body and soul, on a romantic, sexual journey previously lived only in Kevin's fantasies. And no dream was ever this good, no truth this undeniable.

Will Kevin ever be the same? When the camera's put away, will Teak live up to his name?

Overall
I like photographers in stories and tattoos, so this seems like a match made in heaven. But while most of the story itself wasn't bad, many of the writer's choices, specifically in dialogue and while in bed, kept me from enjoying this as much as I could have. However, this is definitely a personal feeling--what bothered me may not bother another reader. See more details below.

What impressed me most is some of the instances that are set up for classical major dramas that the author doesn't take. While it may not be the path less traveled, there is at least different scenery along the way. The writing wasn't terrible, but it wasn't incredibly strong either; it was just good enough to keep me reading, as long as I skipped most the sex scenes.

Strengths
The plot was probably the most interesting element of the novel. In the beginning Kevin struggles with his suddenly altered view of his sexuality, while also being unable to deny that Teak is attractive--something more than just a photographer's appreciation. As he comes to terms with that, he's then faced with having to dump his girlfriend and having to find a way to make a long-distance relationship work--assuming Teak is even interested.

Beyond all of that, Kevin and Teak have to deal with some pretty common stuff that any couple--especially a gay couple where one member is "famous"--has to deal with. What I liked was that not every incident caused a huge blow up and lots of drama. That part felt extremely realistic, especially after a somewhat wobbly beginning.

Weaknesses
Hello Random Change in Perspective. Pet peeve, I know, but for 80% of the book we are in Teak and Kevin's head, and then, suddenly, we are in other characters' heads. If we had moments similar to this earlier in the book, I may have let it go, but the sudden switch is a giant niggle to me.

Thank you for your thorough review.