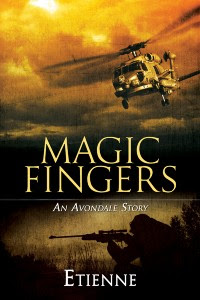 Blurb
David Majors should be looking forward to a long and prosperous life: after tours in Iraq and Afghanistan, he’s attending college courtesy of Uncle Sam and riding the fast track to success. He’s tall, fit, and good-looking, so shouldn’t the world be his oyster? But underneath his clothes—and beneath the surface—David is a mess of scar tissue and insecurity.

Then he meets Kevin Boxer, another former Army Ranger. Their first night together, Kevin stares David’s scars in the face and doesn’t flinch, instead showering David with the passion and attention he craves but never imagined possible. Slowly but surely, Kevin helps David rebuild his confidence, and the two of them begin to build their life together. But their journey is far from over, and it turns out Kevin may need David to help him heal some scars of his own.

Overall
Although this books is promoted as stand alone (part of the Avondale series), I don't think readers who aren't already familiar with the characters from the other Avondale stories will take much from this novel. Although the initial premise is interesting and promises emotional and psychological exploration, the story mainly just follows Kevin and David from their first passionate meeting through to many years later.

The difficulty of finishing the novel is that if you haven't read any of the previous Avondale books, very few, if any, of the characters hold much meaning, so the reader is just guided through everyday life while constantly waiting for something to happen. Nothing does. This may be a good read for fans of Avondale who want to know more about this couple, who I'm guessing make appearances in the other novels (which is why the story got 2 stars instead of 1), but I wouldn't recommend it to the random reader.

Strengths
This story has a very interesting concept that I was eager to see explored: A man deprived of his manhood in modern day America. I've dealt with similar concepts before, but the social environment was never the same, although certain implications still stood true. In Magic Fingers, David not only has to come to terms with his injury, but he has to face others judging him in a very personal, intimate manner. And until he meets Kevin, he's never come across someone who hasn't walked out. There was a potential for great emotional and psychological depth to be explored here.

The writing wasn't bad, but it did feel a little stiff--or at least not strong enough to make up for the lack of story. It was good enough that I did finish the novel, even though the plot and characters didn't entice me.

Weaknesses
This story lacks any real plot line. Although plenty of things happen from beginning to end, none of them are explored thoroughly or as a driving focus of the story, except maybe David's injury. But even that isn't given it's due as while it affects multiple things in the story, it never really goes beyond surface tension. The lack of plot is the biggest weakness of this story as it takes two characters and gives them easy challenges that they always overcome, sometimes with the help of family and friends. The conflicts are always outside sources that are taken care of within a few pages. This read more like a happy dream-fantasy than a novel.

I was also a little disturbed with how David told his father about his injury. Perhaps that shows my own prejudice, but I don't know many sons who would just drop their shorts in front of their father. This was after several other incidents (the party where David first walks around naked in front of other people) that made me feel very disconnected to the characters. They live in a very different world from me and the author never helped me bond with them.

Spoilers below
*
*
*
I think the most frustrating part of this story is that there are so many potential points of interest that could have been developed. David's injury obviously caused him plenty of previous psychological issues, but when Kevin accepts him (instantly) there is little further drama, except when David is expected to walk around nude or tell his family. Potential for emotional/psychological development that was never touched upon.

Kevin's family is pretty messed up, but he's turned out alright, probably due to his great aunt's and grandmother's influences. The book blurb is probably referring to this as the scars that David will help him heal, but these didn't feel like scars so much as scratches from a pricker bush. Band-aids and kisses made them all better.

Finally, they adopt Kevin's nephew, who has abandonment issues, which they talk about and are careful about, but never really need to face. Another potential for developing characters that was left as something that was talked about but never explored.

All these points suffer from the reader being told the story instead of shown it. Even the writing style goes along these lines, as the first person perspective switches between the two leading males as if they are taking turns telling someone their life story. I think this would have worked better if we were shown one major event in their lives instead of being told about all of them.

Requested this book for review.
Posted by Unknown at 18:39

You seem to have a problem with male nudity in front of other males.

I have to tell you that when I was growing up, fathers and sons routinely shared locker rooms when we met other family members for outings in places where swiming and locker facilities were available.

Ever been to a gay clothing optional resort? Or a bathhouse? Nudity is the order of the day.

Add to that the fact that David is ex-military and accustomed to being naked in front of other men.... and the fact that from day two, Kevin pushed him to confront his fears... It makes perfect sense.

@GG I thought I'd admitted that I may have been biased in my judgement of that element, for that specific reason that you mention. In addition, the nudity only bothered me in front of his father, as it seemed rather abrupt and strange (to me, and probably other readers, which is why I mentioned it).

Thank you for sharing your thoughts on my review.