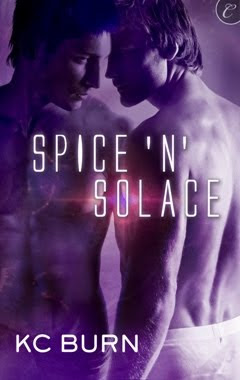 Overall
With a fairly strong beginning, and a relatively enjoyable story, the final 15% of the book was disappointing as it too easily fixed issues and solved everything. Although I enjoyed the interactions between Jathan and Kazha, the events that happen outside of the apartment do very little to hold my interest. Jathan's work in negotiations is interesting but brushed over, which is understandable to avoid a politically heavy book, but there was something happening with R'Kos that were hinted at but never developed and make me wonder if there is going to be a story about him. The writing was fairly good, although a few word choices left me wincing (eg, joy button). I enjoyed the novella until the end, wondering where the author was going and how things would be resolved, but was ultimately unsatisfied.

Strengths
I really enjoyed the varied characters, including some of the smaller characters such as the guard Sven. The characters really came to life and weren't flat, although sometimes when under pressure they behaved outside the norm, this could be chalked up to the stress. I connected with the main characters and were drawn into their plight--I wanted them to find happiness.

Pacing. Except for the final 15%, the pacing was very good. The introduction of the characters and their eventual meeting aren't rushed, and although there is a time skip in the days they are together, it doesn't feel like we skipped anything vital to the development of the characters. Their relationship is definitely Lust at First Sight and quickly translates to Love, but even this is forgivable within the genre and the hints that they are "mates," which the alien culture deems important.

Weaknesses
Some of the word choices during the sex scenes felt almost porny and threw me out of the story.

The Gay Taboo. For a story that supposedly takes place in the future, there is still plenty of bias against homosexuals. While they can marry and it is recognized by the government, among Kaz's friends it is seen as a weakness. The amount of bigotry still existing was surprising. While I can understand things fluctuate in how society accepts them, there was no reason offered for why it's not accepted when the reader lives in a world where it is slowly becoming more accepted. All I needed was a reason.

***WARNING: SPOILERS***
*
*
*
*
*
*
*
The end. The end really annoyed me. The reader is taken on this journey through a dark, seedy world and comes out the other side sparkling clean and glittery. I think if it had been stretched out and explored, the end may have worked, but it as rushed and tacked on. Huge issues that hang over the heads of our protagonists are solved in an easy one-two. He's a bad guy who's trying to take over your company? Nope, it was just a misunderstanding. Can't marry a man because of requirements of your position? Nope, just another misunderstanding. Vaughn aside, I felt the final chapter added enough closure that the epilogue was unnecessary and possibly the worst part for me.

In addition, multiple characters seem to have dramatic personality changes and Jay and Kaz, while wonderfully in love, seem to become members of the Brady bunch who happen to like a bit of dom/sub behavior. The epilogue oozed cheese (and not the delicious kind that goes on nachos). I feel that if the changes that needed to happen for them to be together had been thoroughly fleshed out, I wouldn't have had problems. Instead, everything is solved neatly and tied in a pretty bow without us seeing how it all came to be and the struggles they dealt with to get there. It felt too easy, and while I understand not all of life is a angst-filled struggle, in a world as darkly described as the one this book exists in, the end felt false.
Posted by Unknown at 08:45