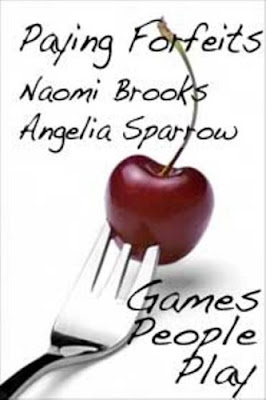 Maybe this just isn't my type of book, but I enjoyed nothing about it. The basic premise is two lovers (Sam and William) have a game they play every Friday. Every Friday it's a different game, and each week they place forfeits--what they get if they win and what they'll give if they lose. I can get around that, it's fun and makes for plenty of sex.

But I didn't enjoy the sex. It was PWP and it wasn't written well enough to be enjoyable for me. And that's just the beginning. I was willing to give it a chance, because sometimes stories just start off rough. And then a third man (Billy, William's nephew) is introduced.

While threesomes are difficult for me to understand, if well written, I can accept them. But here Billy is thrown into the mix without a moment's thought, he forces Sam to have sex with him while he's in a Sub position (not that Sam couldn't have said 'No') and then Sam gets punished far more thoroughly than Billy. (Regardless if he "enjoys" it or not.) First point of contention. Sam is jealous (I would be too), but begins to cope with these feelings, although they never really seem to leave. Even by the end there is a fight between Sam and William! Finally, facing the drama! But no, Billy threatens to leave, Sam says it's his fault that he's jealous and he'll work through it and thus ends the story.